You are here
Home > News > Power Rankings: Ho Back on Top, Close Call For Seymour 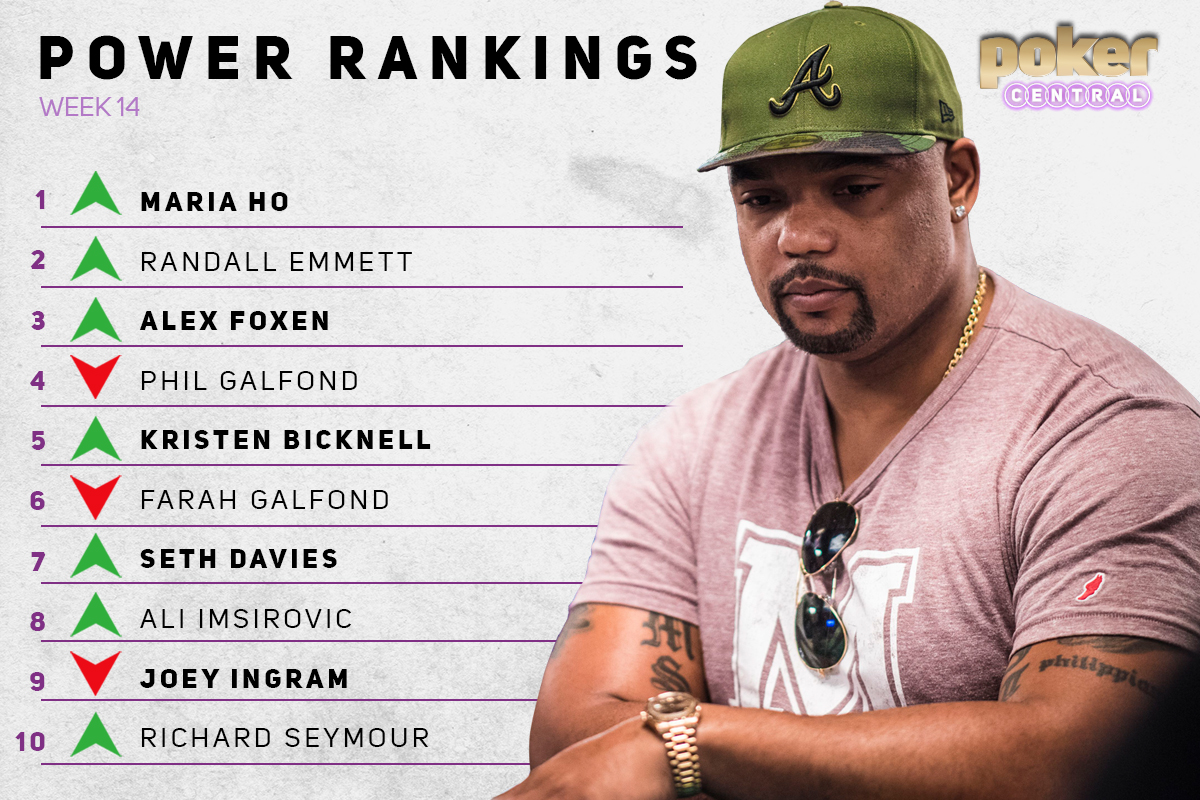 Maria Ho is back on top! The Week 15 Poker Central Power Rankings see a big shift due to a variety of high roller events at both the ARIA Resort & Casino and Seminole Hard Rock as well as the World Poker Tour Main Event. NFL legend Richard Seymour makes his debut on the Top 10 of the Power Rankings while Ali Imsirovic, Seth Davies, and Kristen Bicknell make their return based on strong high roller results.

We will see you in Las Vegas! After weeks on end of being in the Top 10 due to Poker After Dark appearances, national TV moments, and winning a Global Poker Award for Broadcaster of the Year, Maria Ho now grabs the No. 1 spot due to making the final table of the massive World Poker Tour event in Florida. Maria will play for the biggest score of her career on May 30th when she comes into the final table second of six with $715,175 up top.

Thank you all for the positive energy and run-good vibes in the #WPTShowdown 🙏🏼 Super excited to have made another @WPT final table. See you all in Vegas as we play it out on May 30th at @HyperXESALV!

The Randall Emmett hype train is not slowing down one bit! Speculation on a possible return Poker After Dark appearance in the near future along with a highly engaging post on Instagram about last week’s ranking, Emmett added fuel to the fire to warrant his recognition by the panel. Will we see Emmett take the top spot in the near future? Only time will tell as we don’t expect him to slow down his poker playing any time soon.

I know to some this doesn’t mean much but to someone that has so much passion for the game this means the world to me. I want people from all over to experience the game of poker and I hope I show them to not be afraid or intimated no matter what stakes or tourney that want to play. Poker is an amazing game with amazing character and talent behind it. Im honored to be part of this list with so many players I respect and look up to you! I will continue to try and bring fun to this game thank you @pokercentral @bhanksgo

Recently crowned GPI Player of the Year for 2018 at the Global Poker Awards, Alex Foxen continued adding to his quest to go back-to-back this week. Finished second in the biggest High Roller at Seminole for $545,000 right after getting third in the $50,000 for $180,000, now brings Foxen’s earnings for the year up to just a hint below $2 million. If Foxen continues this run, he’ll break his personal best set in 2018 when he cashes for $6.6 million.

Dropping from first to fourth, Phil Galfond stayed in the headlines as he spoke on the Poker Central Podcast about his career, Run it Once Poker, and Farah’s ascend up the ranks and into the biggest games in town.

“She Doesn’t Learn From Me!” – Phil Galfond on Farah’s High Stakes Play

Kristen Bicknell has jumped into eighth on the Poker Central High Roller of the Year standings after a second place finish in a recent Bellagio High Roller event. Bicknell also finished sixth in a $5,000 No Limit Hold’em event at Seminole, putting her right back on track to repeat as GPI Female Player of the Year.

Farah maintains to be a fan favorite among the Poker Central voting panel, maintaining her spot in the Top 10 this week by dropping from four to six. Farah dabbled in another massive game at the ARIA this week leading to a great photo of her massive stack as well as some very well manicured nails!

Seth Davies is a prime contender for the Poker Central High Roller Player of the Year as he now ranks tenth after winning one of the Bellagio events. Davies raked in a $105,800 score followed by a third place the following day and a near miss in the WPT Seminole event.

Just like Seth Davies, Ali Imsirovic is also making his way up the ranks in the High Roller Player of the Year standings. Imsirovic now sits in fifth place after winning one of the Bellagio events for $105,000. Imsirovic won a U.S. Poker Open event earlier this year and in Florida, he fell just short by taking 13th in the $25k won by Aaron Mermelstein, albeit that event didn’t count.

The King of Poker Twitter, Joey Ingram, drops a few spots but remains in the Top 10. Ingram dove into some fights on Twitter, the recent ACR Poker refund and he recorded a highly insightful podcast with Garrett Adelstein. Keep it up Joey!

Here are some timestamps from the latest podcast w/ Garrett. Thanks to @AndreasFroehli for putting them together.

NFL legend and three-time Super Bowl champion Richard Seymour made some serious waves this week by making a deep run in the World Poker Tour Seminole Hard Rock Showdown event. Seymour came awfully close to his first ever WPT final table but ultimately he bowed out in 15th place for $36,195. This marks Seymour’s third largest tournament result trailing only his 18th-place finish in the WPT Five Diamond as well as his breakout third-place finish in the $25,000 High Roller at the PCA for $376,360 in 2018. In addition to his poker success, Seymour was also recognized with a nomination for the New England Patriots Hall of Fame.

In 2001 we started something new by entering the field together as a team, 1 unit focused on bringing the Pat's it's 1st SB.

knowing how instrumental these guys were to me as a player and as friends, it would be an honor to walk in together with my brothers. https://t.co/0L34TaI6JX

It was vey busy near the top as WPT chip leader James Carroll and high roller winner Aaron Mermelstein fell just short of the Top 10 along with Daniel Negreanu, Phil Hellmuth, Joe McKeehen, and Maurice Hawkins.