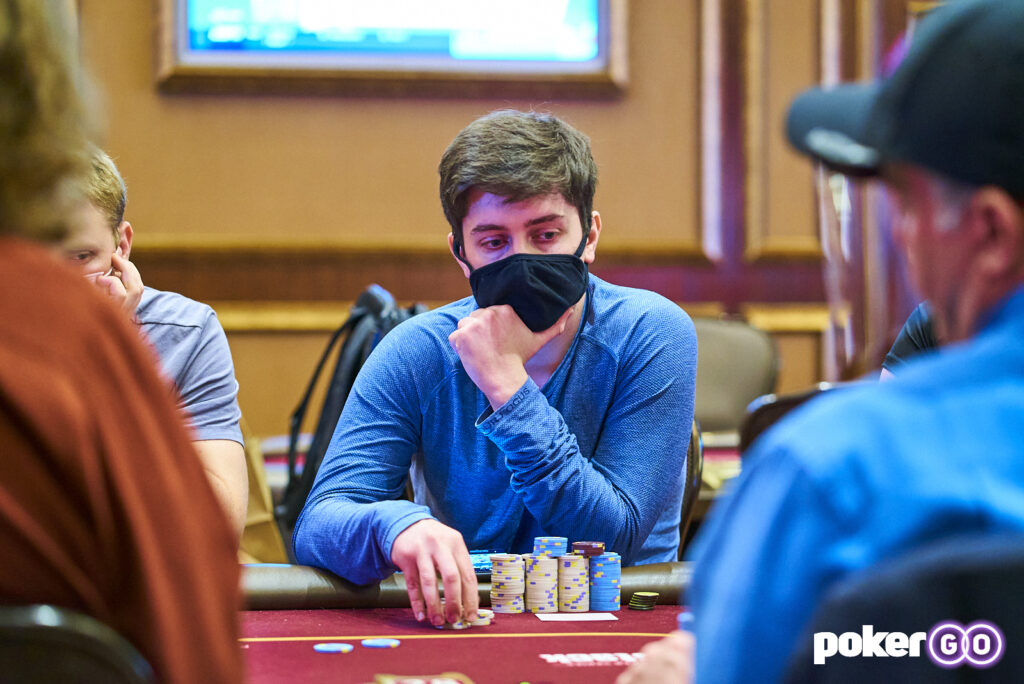 After an extended bubble play that took nearly an hour, heads-up play last all of seven hands before Ali Imsirovic emerged victorious in the Venetian High Roller Event #5: $10,000 No-Limit Hold’em after surviving a massive cooler against Eric Worre heads-up. The 34-entrant field generated a total prize pool of $340,000, with Imsirovic taking home the $136,000 first-place prize.

Imsirovic entered heads-up play with a slight chip lead, but Worre would eventually take a 10,000 chip lead into the cooler to end the night. Imsirovic opened to 75,000, and Worre defended the big blind. The dealer spread the

on the flop, and Worre check-called a 100,000 chip continuation bet. The turn

hit the felt the fireworks began to fly. Worre bet 325,000, and Imsirovic used all of his shot clock before moving all-in for just over 1.5 million chips. Worre went deep into the tank, saying, “Dude, I have a great hand. I was slow playing you. I don’t think I can fold.” Before using two time extensions and eventually sliding in the call.

for a flopped two pair, but Imsirovic tabled

for a turned set of kings to collect the pot and leave Worre with just 10,000 in chips. On the next hand, Worre was all-in holding king-five against the ace-queen of Imsirovic. The board ran out clean, Imsirovic took home the trophy and added to his already sizeable PokerGO Tour points lead.

Worre held the chip lead for most of the day after eliminating Barry Hutter late in level 8 for over a 1.3 million chip pot. Worre opened to 20,000 only to see Hutter three-bet to 55,000. Worre four-bet to 160,000, and Hutter called. The flop fell king high, and Worre moved all-in, and Hutter snap called. Hutter held aces against the ace-king of Worre. The turn was no help, but when the king of spades hit the river Worre spiked trips to collect the pot and control over 38 percent of the chips in play. Unfortunately, Worre could not parlay that chip lead into the win, settling for the $88,400 second-place prize.

Sean Winter followed up his fifth-place finish in Event #4: $10,000 No-Limit Hold’em with a third place finish for $54,400 in Event #5. Winter navigated a short stack for the entire final table before falling victim to Imsirovic. Winter held pocket tens against Imsirovic’s pocket nines and looked to be in great shape to double, but a river nine sealed his fate.

Nick Schulman would fall to Imsirovic on the direct bubble after getting his last 185,000 all-in from the small blind with jack-ten. Imsirovic woke up with aces in the big blind, proceed to flop a set, and had Schulman drawing dead on the turn to bust the money bubble and send Schulman to the rail. Other notables to finish just off the money included Sam Soverel, Bill Klein, Nick Petrangelo, and David Peters.

The PokerGO News Live Reporting team will be back on The Venetian Resort Las Vegas to provide live updates of Event #6 $25,000 No-Limit Hold’em starting Saturday, August 14, at 2 p.m. PT. 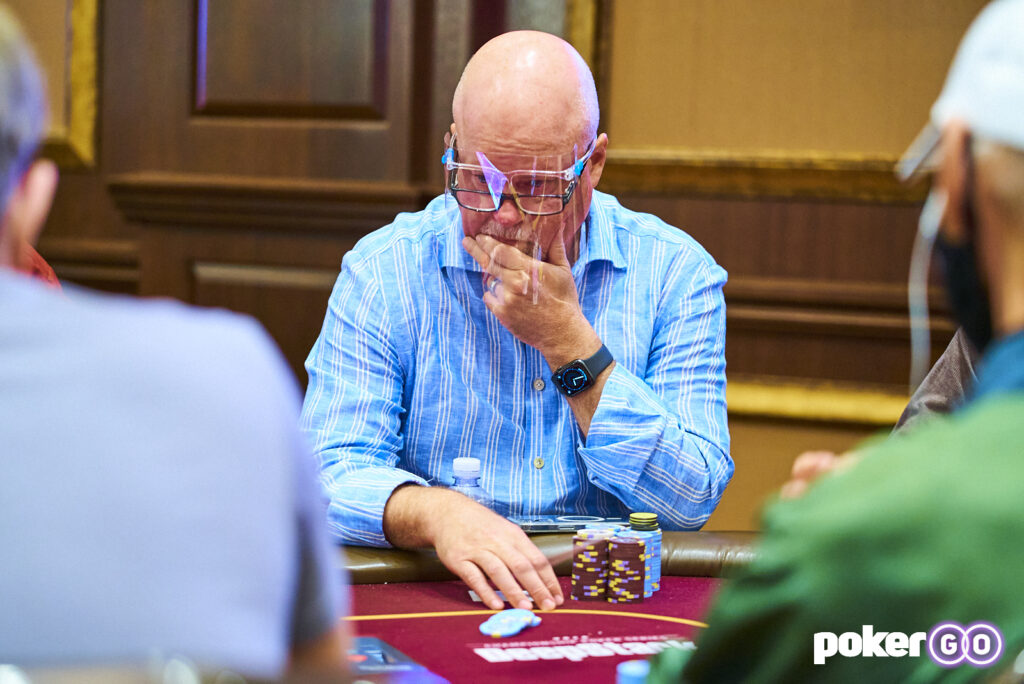 completed the board, and Worre bet 325,000. Imsirovic quickly moved all in, and Worre went into the tank.

for two pair queens and sevens, but Imsirovic tabled

for a turned set of kings to collect the pot. After a count of the chips, Worre was left with just 10,000 chips.

The next hand Worre was all-in for his last 10,000, from the small blind and Imsirovic called from the big blind.

, and Imsirovic’s ace-queen held to eliminate Worre in second place for $88,400. 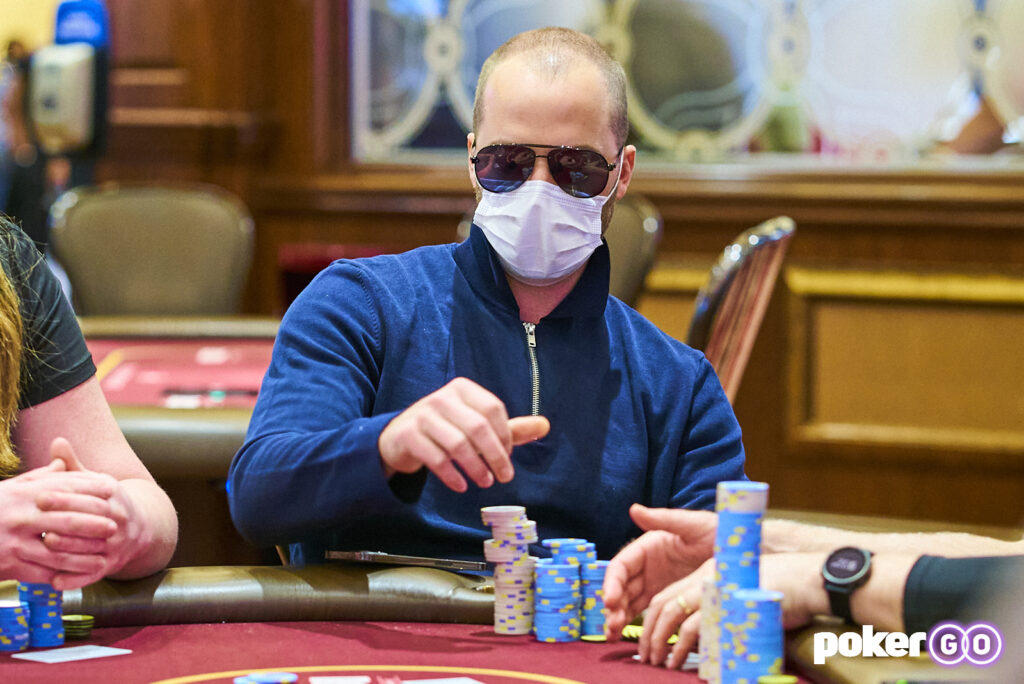 With the board complete and reading

for two pair tens and jacks, but Imsirovic tabled

for the rivered full house to eliminate Winter in third place for $54,400.

With the elimination, Imsirovic moves into a slight chip lead as heads-up action begins.

Eric Worre opened to 70,000, and Sean Winter called in the big blind.

hit the felt, and Winter spiked trip jacks to stay alive and double.

Action folded to Ali Imsirovic in the small blind, and he completed. Sean Winter checked his option in the big blind.

The dealer spread the

on the flop, and action checked through.

hit the felt and action checked through a second time.

completed the board, and Imsirovic fired for 60,000. Winter used a time extension before tossing his cards into the muck. 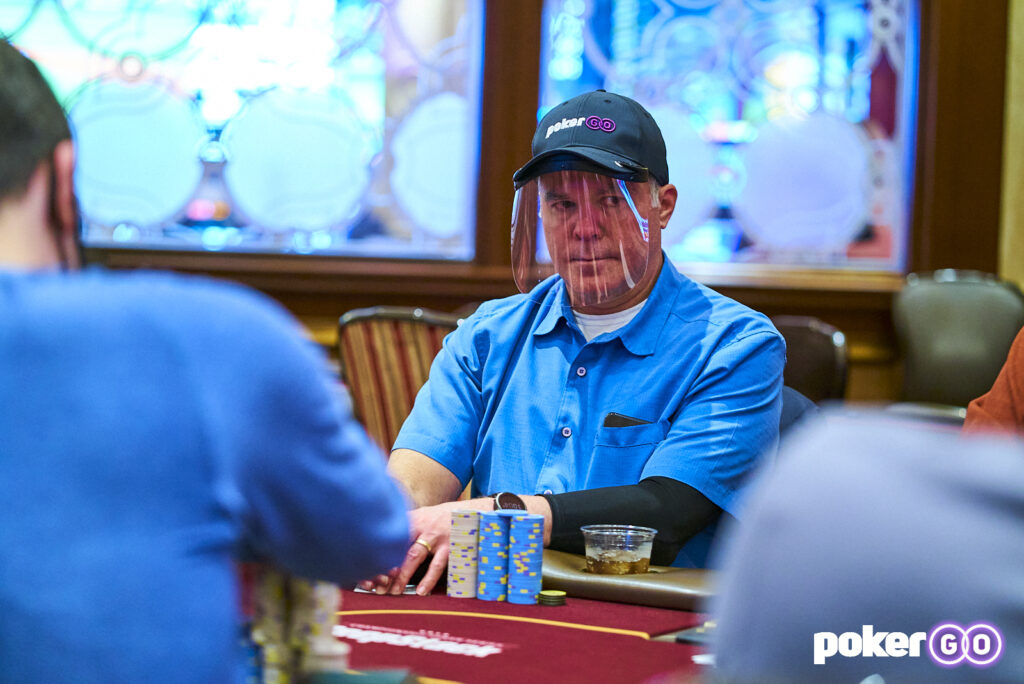 Action folded to Cary Katz on the button, and he limped. Eric Worre completed the small blind, and Ali Imsirovic raised to 80,000 from the big blind. Katz and Worre called.

, and action checked to Katz, who moved all-in for 300,000. Worre called, and Imsirovic folded.

on the turn, and when the

hit the felt on the river, Katz was eliminated in fourth place for $37,400 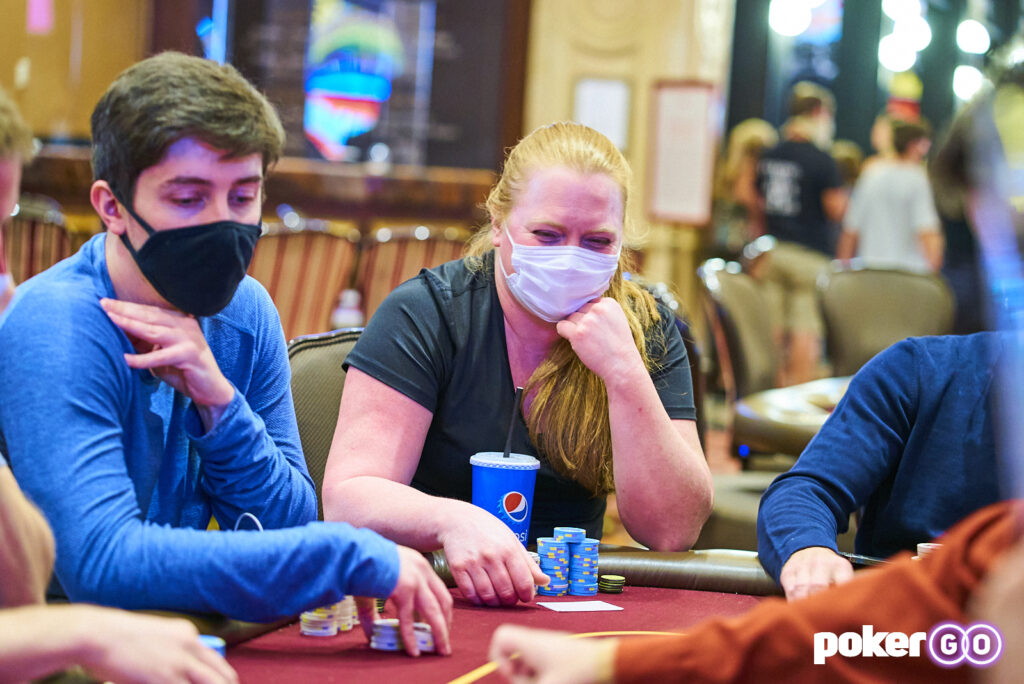 Action folded to Ali Imsirovic on the button, and he moved all-in. Katie Wier folded the small blind, and Sean Winter called all-in for 185,000 total.

and Winter turned a boat to double.

Cary Katz limped on the button, and Eric Worre completed the small blind. Ali Imsirovic was in the big blind and checked his option.

, and action folded to Katz, who fired for 45,000. Worre called, Imsirovic folded.

completed the board and Worre lead out for 75,000. Katz mucked, and Worre crossed two million in chips. 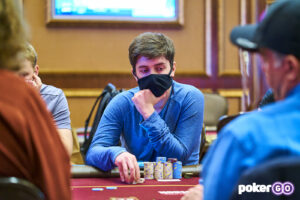 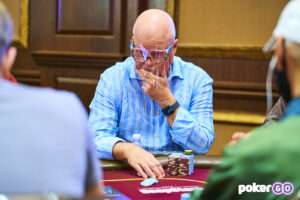 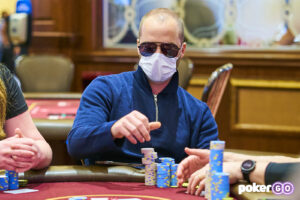 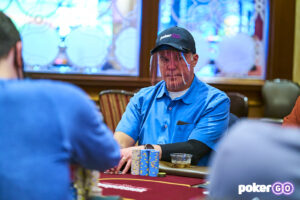 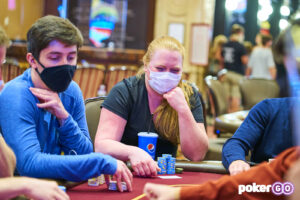 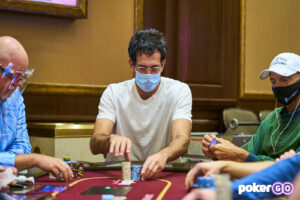 Nick Schulman Eliminated by Ali Imsirovic to Burst the Money Bubble
August 14, 2021 at 2:09 am ET 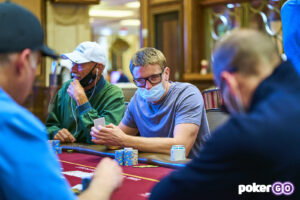 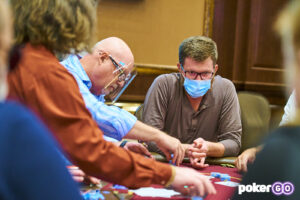 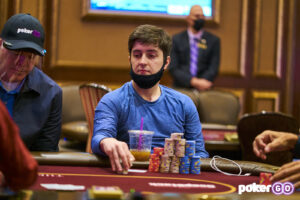 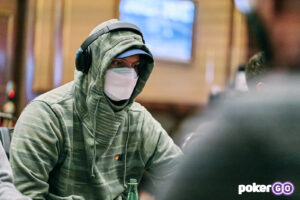 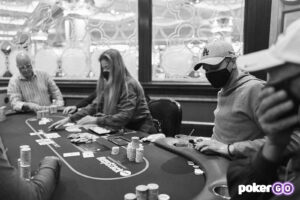 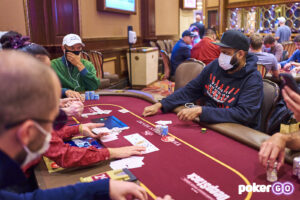 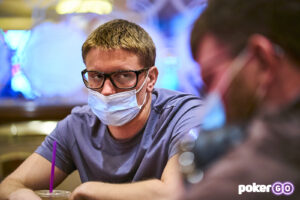 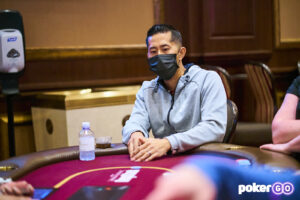 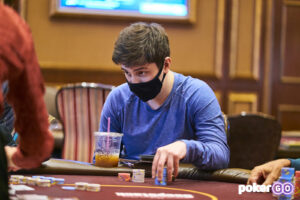 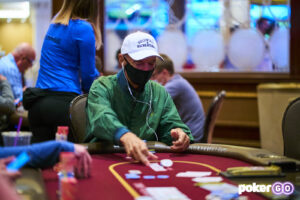 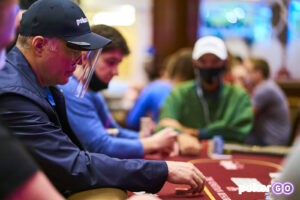 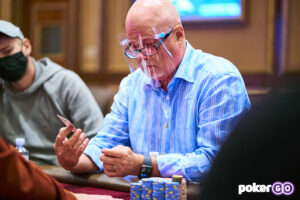 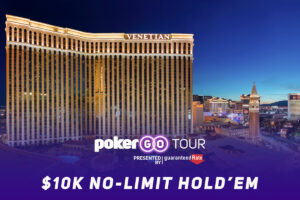