The final four players are oscillating between being bunched tightly in chips and having one player stretch a slim lead; they’re evenly matched in experience, skill and, so far, help from the deck.  With the blinds creeping up, however, it would only take one big match-up to end the dreams of the trophy for one of these tough competitors who seem just as confident in a marathon as a sprint.

Vogelsang Check-Calls His Way to a Big Pot

First to act, Christoph Vogelsang raised to 175,000 with

flop, though it was Vogelsang who’d hit top pair, it was Badziakouski who took over betting.  Vogelsang called his 175,000 flop bet, and his 525,000 bet on the

turn, before checking a final time on the river, having spiked a second pair with the

.  Badziakouski considered this card for a while, his opponent’s stack just under the pot now, but elected to give up at this juncture.

A raise to 165,000 on the button from Christoph Vogelsang with

brought small blind Timothy Adams along to a flop of

Adams limped his small blind when it folded to him with

, calling when Vogelsang, with

flop but lost him on the

Adams Continues to Chip Up

Timothy Adams took a sizeable pot from Mikita Badziakouski (along with a few smaller pots), seeing a

flop from the big blind with

; Badziakouski on the button had raised preflop with

turn.  Both players checked, Adams leading on the

river for 425,000.  Badziakouski made the call and this pot evens up all four players’ stacks yet further.

Small blind Timothy Adams raised to 250,000 when it folded to him on the small blind with

turn, Adams checked and Vogelsang not-so-swiftly checked behind.  The

Christoph Vogelsang raised his button with

, and big blind Timothy Adams, with

The turn paired the board with the

on the river saw Heath stab at it with a bet of 60,000, Vogelsang calling quickly and showing down a winning pair of kings.

Mikita Badziakouski raised in the cutoff to 135,000 with

, flopping sevens full of eights.  He led out for 125,000 and Heath made the call.  After the turn, the board stood

A big river move with ace-high from Mikita Badziakouski has stopped Christoph Vogelsang from running away with the lead (the German having added to his stack with some creative play recently, including setting Ben Heath all in on the river of a

after an intense period of consideration).

.  Vogelsang considered this for a while, looked like he was reaching for chips, and at the last minute flicked his cards one at a time into the muck.

It seems that all four remaining finalists have now spent some time at both the top and the bottom of the chip counts, tested both as a short stack and with the power of chips behind them.

It’s Timothy Adams’ turn to bring up the rear stackwise, after a pot against Mikita Badziakouski.  Adams had defended for 120,000 in the big blind with

, spiking bottom pair on a

flop.  Badziakouski on the button (with 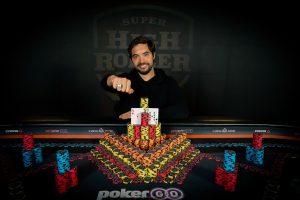