After the Short Deck intro to the 2020 Russian partypoker LIVE MILLIONS Super High Roller Series (won by Jiang Xia He for $378,000 yesterday), players in Casino Sochi are ready for their first “regular deck” $25,000 final table, in which over $1.4 million will be awarded today to one of these nine competitors:

Yee holds a solid lead over the other eight remaining players (all in the money, a share in the $1.4 million prize pool worth at least $43,500 locked up) with over twice the chips of his nearest rival, ultra-late registrant Sam Trickett.  Four players return with a stack of just under half a million chips: Timothy Adams, Paul Phua, Matthias Eibinger and Phil Ivey (16 or fewer big blinds); expect action from the start on both the livestream on PokerGO and here from 8am EDT/3pm local time..

Prizes to be awarded on the “unofficial” final table:

It is no surprise that the Sochi Super High Roller Series has brought out the big guns in globe-trotting tournament poker; a full week of events starting at the $25,000 level will see the game’s elite battle for trophies (and associated payouts) here amongst the majestically snowy mountains. Stay tuned for live reporting (in time with the livestream’s cards-up delay) starting in one hour from now. 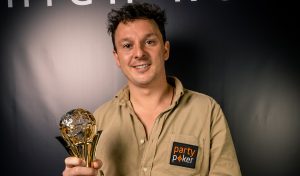