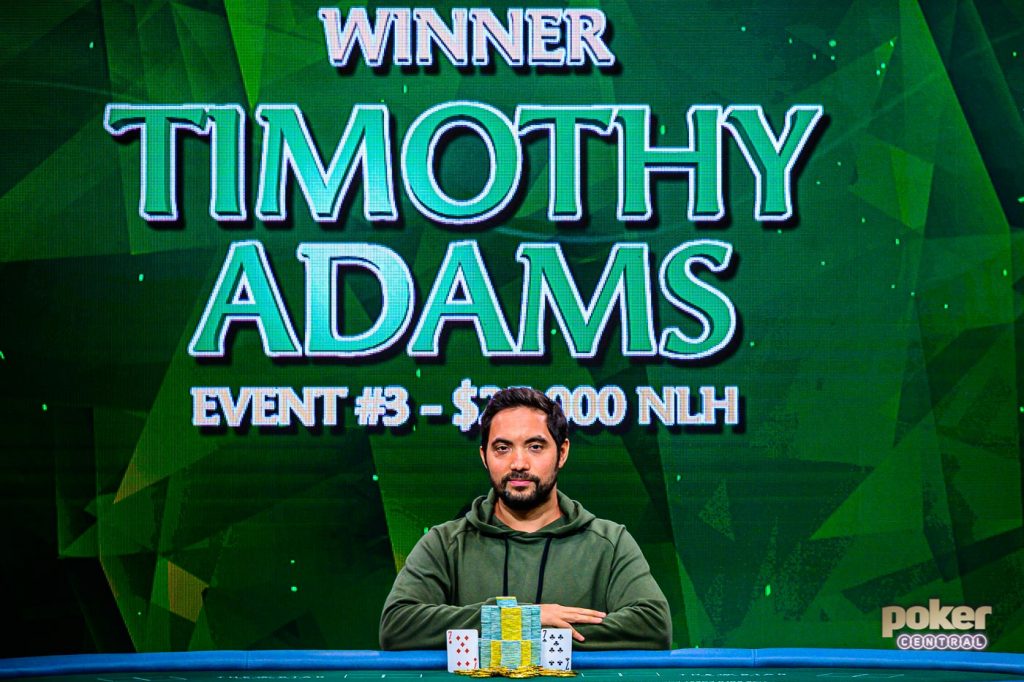 Canadian top pro Timothy Adams has added another massive win to his stellar live tournament resume by taking down Event #3 $25,000 No Limit Hold’em at the Australian Poker Open for A$416,500. With this win and after beating Stephen Chidwick heads up, Adams is now the 28th player in poker history to cash for a total of $19,000,000 in live events.

“This final table was really tough with all guys I’m used to playing against. At the high stakes you play mainly against all the same players and those guys are all really great and I’m very happy that I won. To win a tournament a lot of things have to go your way and today that happened to me.”

The six-handed action started with a bang as Aaron Van Blarcum was eliminated right off the bat. Van Blarcum was all in with ace-three and up against Stephen Chidwick’s pocket sevens and those held up.

Orpen Kisacikoglu busted a few hands later in fifth place when he was the victim of a big cooler running ace-queen suited into Chidwick’s ace-king. This fifth-place marked Kisacikoglu’s second Australian Poker Open cash which makes him a strong contender for the overall Championship.

While the Aussies started every final table of the Australian Poker Open with the chip lead, they have yet to close one out as Andy Lee finished third today. Lee’s final hand was especially painful as he ended up all-in on the turn with top pair against Adam’s king-high flush draw. The river brought a heart to break Lee’s and send him to the rail.

Chidwick and Adams played heads up for only a few short hands, all of which were won by the Canadian. On the final hand, Adams’ pocket sevens held up against Chidwick’s ace-five to snag the win and a hefty 300 championship points.

Two of the game's best heads up for the Australian Poker Open $25K title! Can Stephen Chidwick catch or will @Tim0theeAdams take it down? https://t.co/j4lvVmqlX2 #APO🇦🇺 pic.twitter.com/9p2aBuLOQH