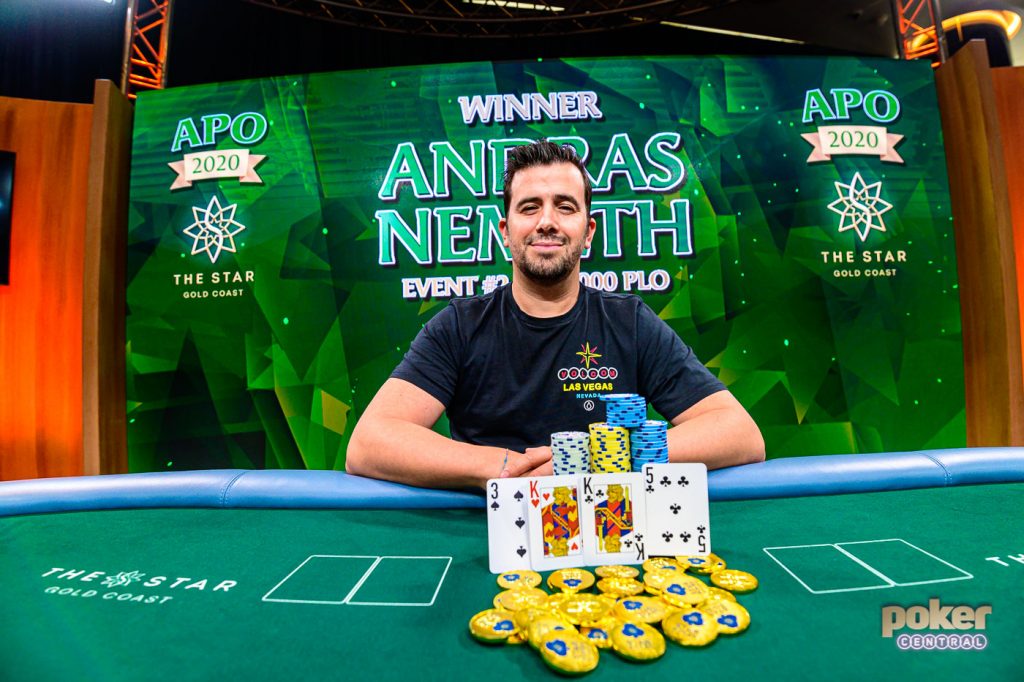 Hungary’s Andras Nemeth recorded the second-biggest victory of his poker career at the 2020 Australian Poker Open by defeating a field of 43 elite entrants into the $10,000 Pot Limit Omaha event to take home the $146,200 top prize. Nemeth defeated local Najeem Ajez heads up while sending Event #1 winner Mike Watson out the door in third.

“I love it here, I love Australia the most,” Nemeth said with a big smile after his win.

“If Australia wasn’t so far from my home in Budapest I would probably try to live here. The casino staff, the people, the dealers, everyone is just so friendly. The dealers especially try to bring a friendly atmosphere to the table and that’s special,” Nemeth added about his overall experience at The Star Gold Coast.

Poker Hall of Famer Erik Seidel, hot off the Aussie Millions Main Event final table, was the first player to bust when he committed his stack with jack-ten-seven-four rainbow. Sitting on a short stack, Seidel ran into Ajez’s kings and the board brought him no help.

Sean Winter, who made big waves during last year’s U.S. Poker Open and Poker Masters, busted in fifth place holding pocket kings with jack-seven. After a raise from Winter, Mike Watson re-raised with double suited queens and nines and Winter moved all in. Winter grabbed his stuff and walked off before the flop was even dealt, as his premonition was spot on. The board gave Watson a flush and Winter was knocked out.

Finnish Pot Limit Omaha specialist Joni Jouhkimainen busted in fourth place holding ace-king-eight-six which he shoved into Ajez’s queen-ten-eight-four double suited. On the turn, Ajez was looking at eight outs to send the Finn home and he managed to spike a queen to make two pair rake in another pot.

When three-handed play started Ajez had an enormous chip lead with 2.6 million versus Nemeth’s 655,000 and Watson’s 985,000 but this was no guarantee for the win. Watson battled his way back to grab the chip lead before Nemeth went on a six-hand winning streak that put him in the lead. Watson, winner of Event #1 of the Australian Poker Open, ultimately busted in third to Nemeth.

On his final hand, Watson ended up all in on the turn with an open-ended straight draw versus Nemeth’s two pair. The river brought a blank and Watson busted in third. While it looked as though it was still Ajez’s tournament to lose, the Aussie found himself one card away from the win twice versus Nemeth, but he was unable to close it out. After a series of all ins, Nemeth closed it out with kings versus Ajez’s ace-ten-nine-six with the suited ace. The chips ended up in the middle before the flop and Nemeth came out on top as his kings held up.

How about that for a comeback? 🇭🇺's Andras Nemeth picks up his second cash and first win of the #APO🇦🇺! https://t.co/j4lvVmqlX2 pic.twitter.com/1tuSl3v4kr

The Australian Poker Open Championship Standings are now as follows. 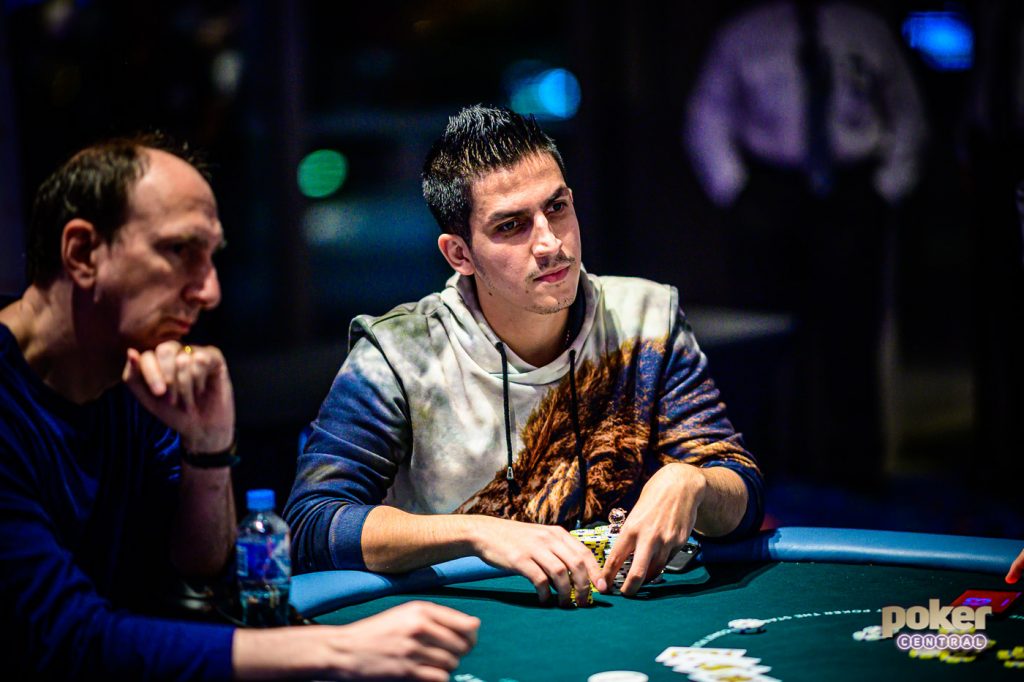 The second event of the 2020 Australian Poker Open was Event #2: $10,000 Pot-Limit Omaha held from inside The Star Gold Coast. After almost 17 full levels of play, Australia’s Najeem Ajez finished as the chip leader with 2,540,000 in chips heading into Monday’s PokerGO streamed Event #2 final table.

A turnout of 43-entrants created a AU$430,000 prize pool as a mix of local players, and international high roller regulars looked to battle it out to claim the second Australian Poker Open title. The money bubble would be reached in Level 16 when Jorryt van Hoof was eliminated by Sean Winter after his flopped set of queens was beaten by running straight cards. The remaining seven players would play just a handful of hands before Chino Rheem found himself all in against Andras Nemeth and running into an unfortunate river card to bust in seventh-place for AU$21,500.

The final six players are all guaranteed AU$25,800 in prize money, but all eyes are set on the first-place prize of AU$146,200 and the title of Event #2 champion. The player best positioned to make a run at the title is chip leader Najeem Ajez. Ajez was the beneficiary of a big pot against then chip-leader Sean Winter that propelled him to more than half the chips in play seven-handed. Ajez has almost 500,000 in career earnings. A win in this event would surpass his previous best cash, which occurred last week when he finished in third-place in the AU$25,000 Pot-Limit Omaha at the Aussie Millions pocketing AU$136,840 for his efforts. A first place finish would also see him rocket up almost 30 places on the Australia All Time Money list to 85th place.

Sitting fourth overall is Sean Winter with 370,000 in chips. At the recent Poker Masters, Winter collected four cashes to see his lifetime tournament earnings currently sit at over $15 million. If Winter can take down Event #2, he will move to 42nd on the All Time Money List. 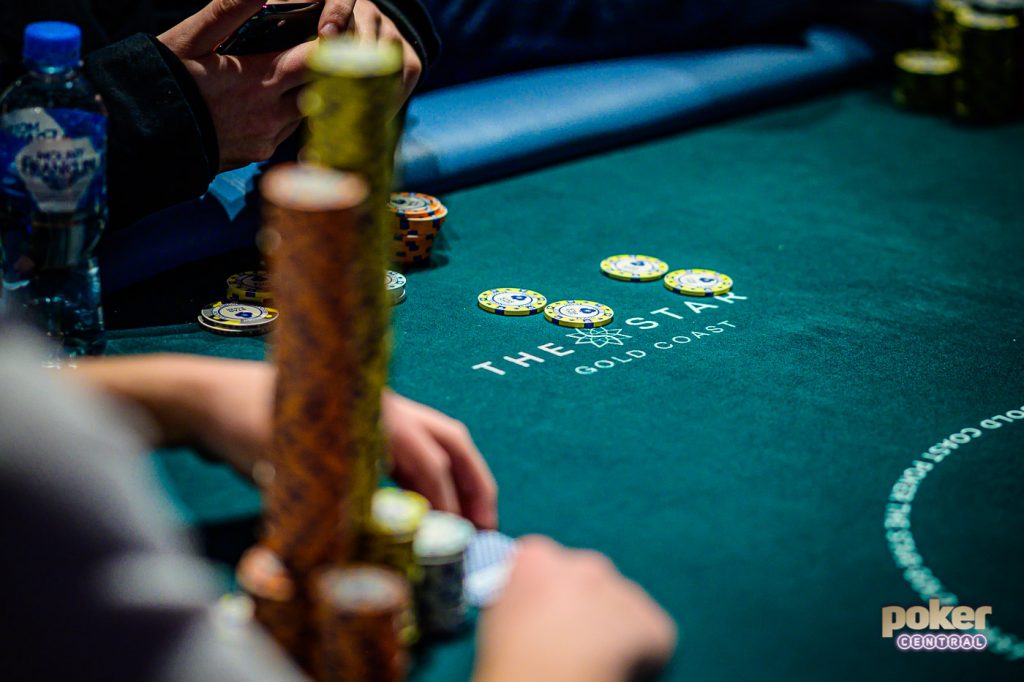 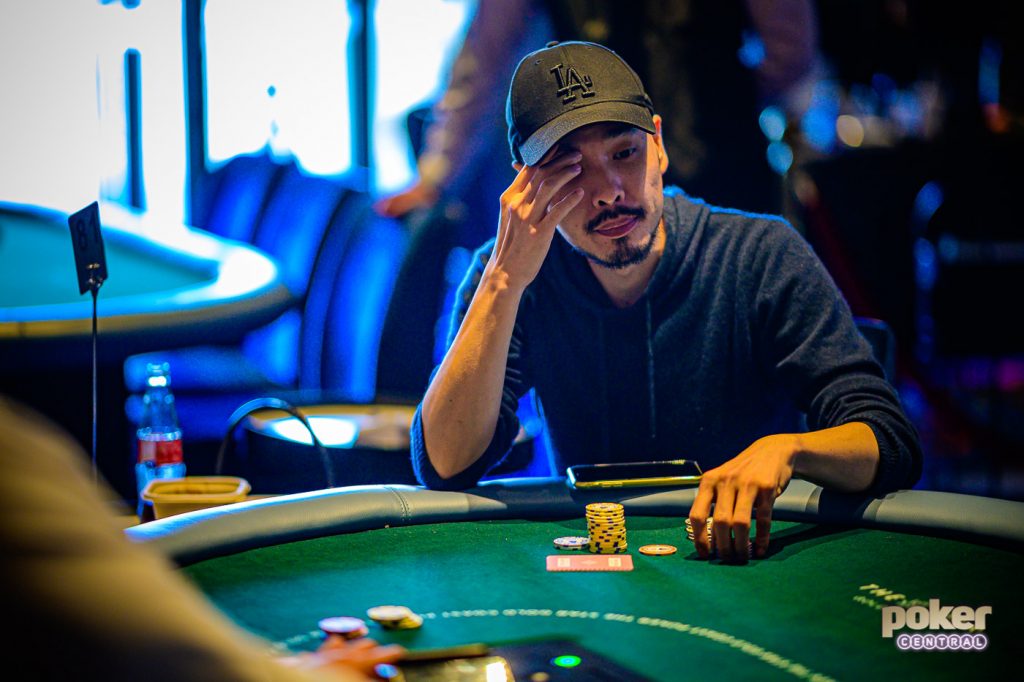 Andras Nemeth raised to 90,000 from middle position. The action folded around to Rheem in the big blind who called for his remaining 90,000 and was all in.

, giving Nemeth the winning hand on the river with a higher pair, sending Rheem to the rail in 7th place.

, improving Winter to a full house, earning him the double. 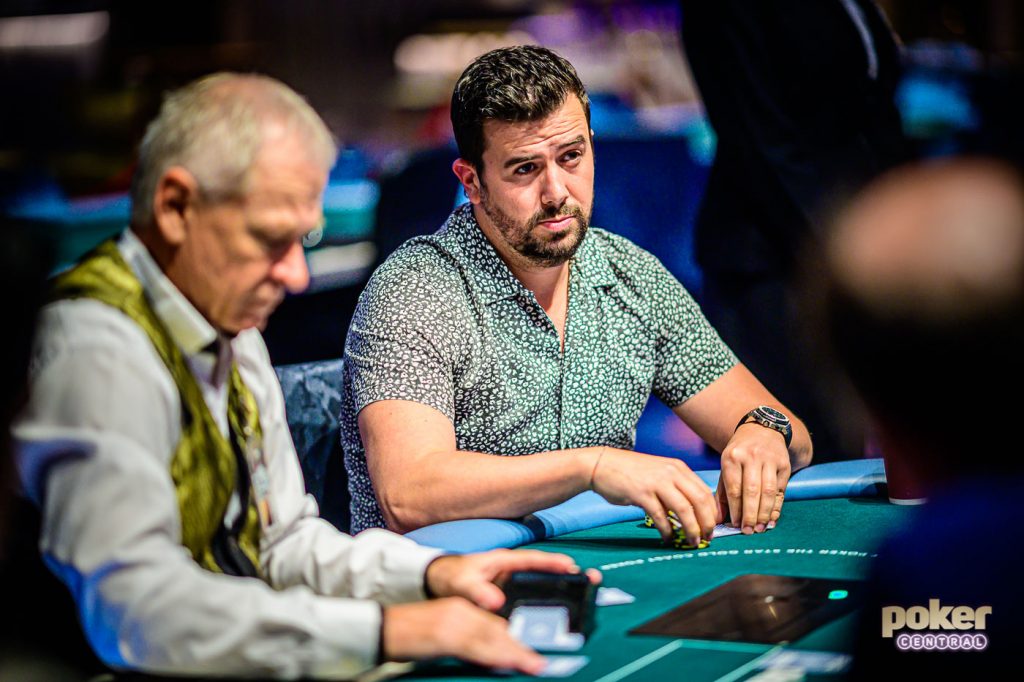 Andras Nemeth raised to 90,000 in the cutoff and Sean Winter called in the big blind.

, and Nemeth doubled through. 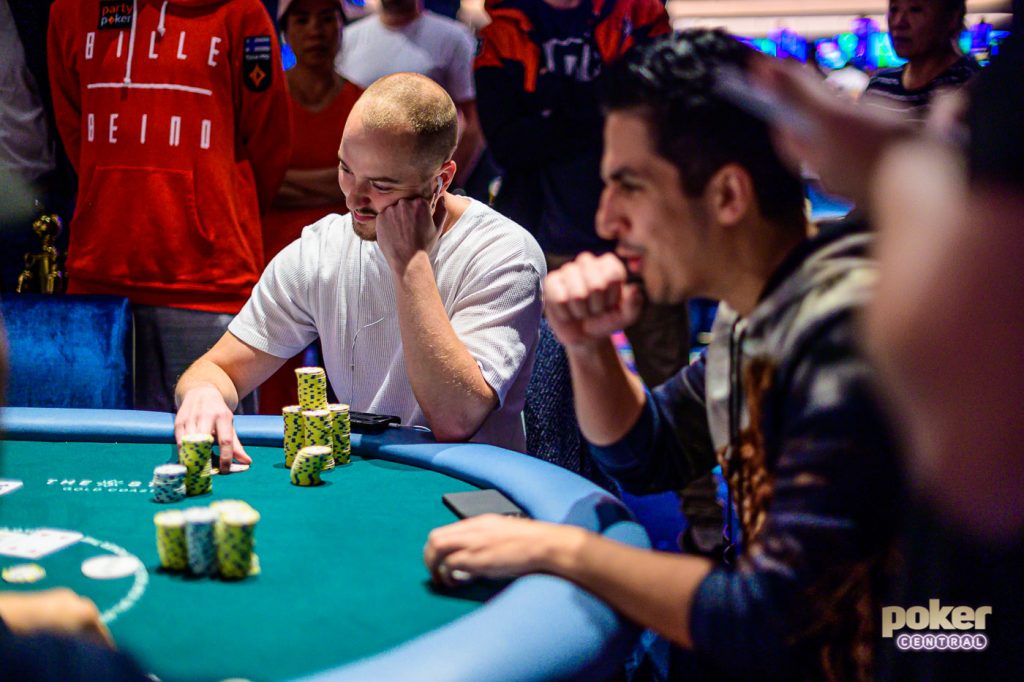 Sean Winter raised to 70,000 from the cutoff. Najeem Ajez potted to 240,000 from the button. Winter called after the blinds mucked their hands.

and Winter bet 220,000. Ajez followed with a call shortly after.

The turn dropped the

Ajez used a time extension before making the call for his tournament life.

Winter had the best hand after flopping a set of tens.

The dealer then produced the

on the river, improving Ajez to the nut flush, awarding him the monster pot. 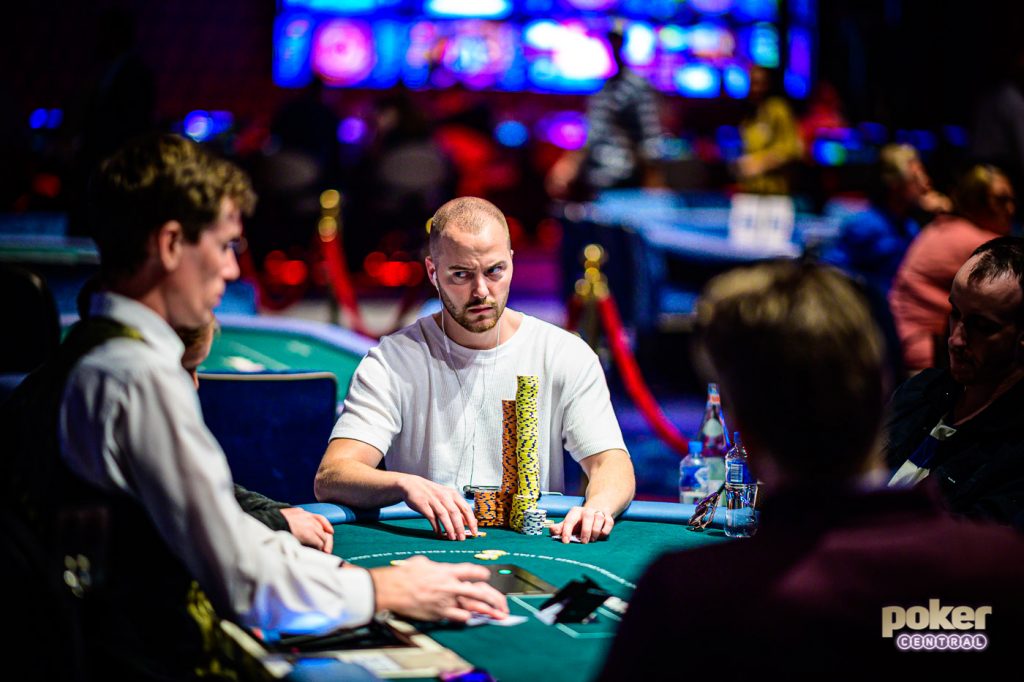 Chino Rheem raised to 70,000 in middle position and Sean Winter called from the big blind.

and both players checked to reveal the

Sean Winter raised to 70,000 from the hijack. Mike Watson moved all in for 180,000 from the small blind. Winter called after Andras Nemeth mucked his big blind.

, improving Watson to two pair, awarding him the double. 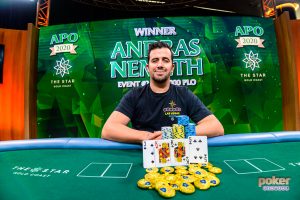 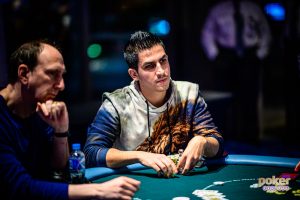 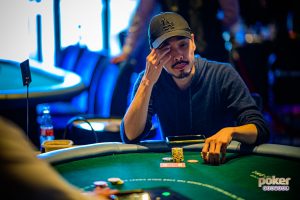 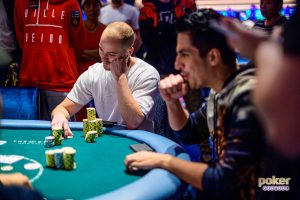 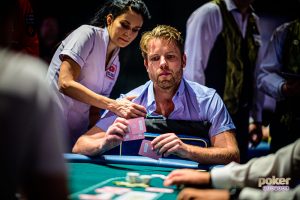 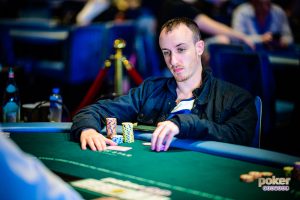 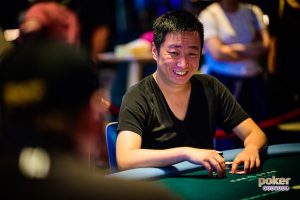 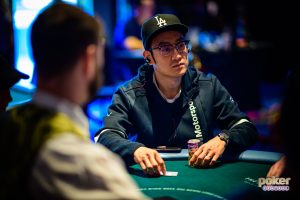 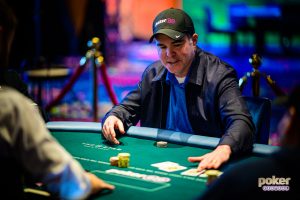 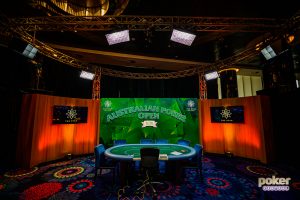 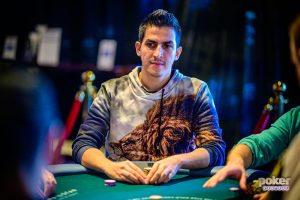 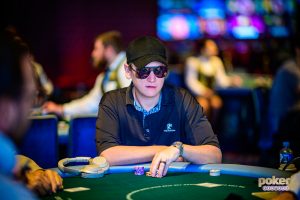 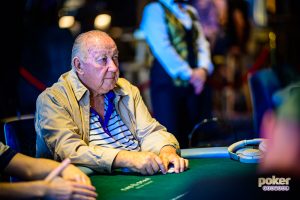 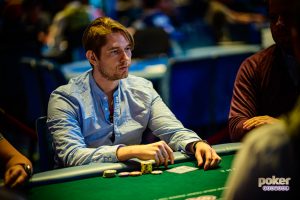 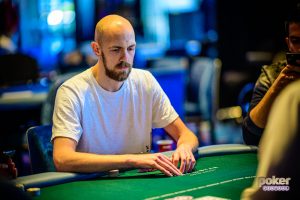 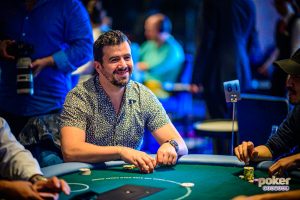 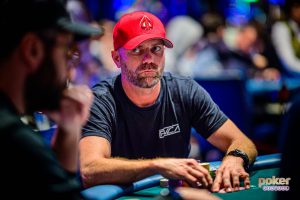 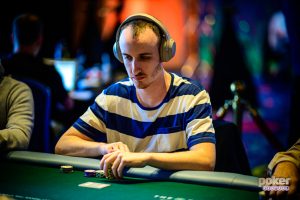