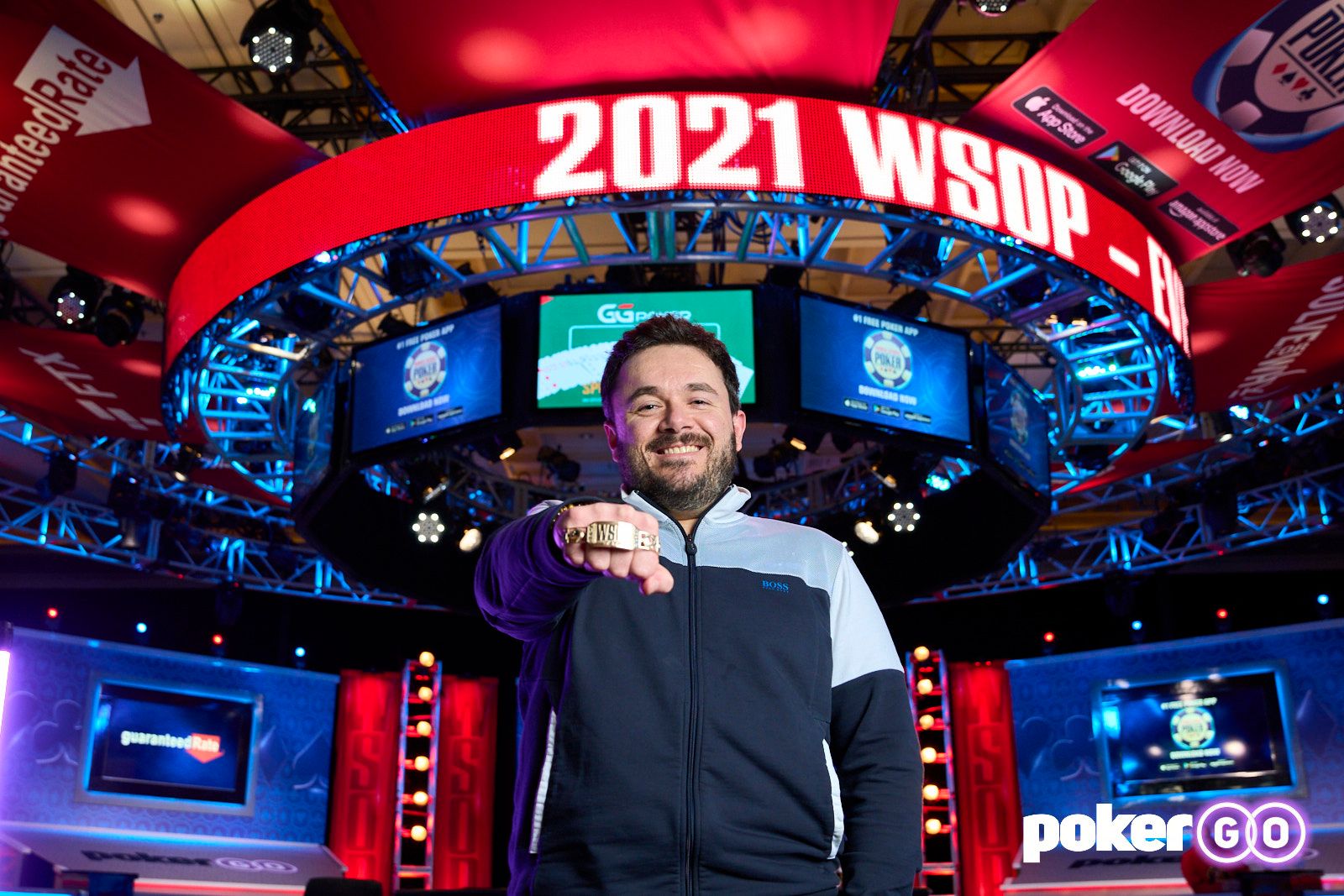 An intense day of action at the felt in the 2021 World Series of Poker saw three bracelets won as Phil Hellmuth fell just short of glory and two first-time bracelet winners joined Anthony Zinno in the winners’ circle. With seven events taking place on Monday, we’ve got the inside track on the runners and riders as more poker greats sprinted for the line.

The seven-handed final table of the Seven Card Stud Championship saw Anthony Zinno claim gold for the third time in his career as he saw of the challenge of former bracelet winners and tournament crushers to prevail.
Phil Hellmuth fell in fourth place as one by one, Zinno either took out his opponents or jockeyed for position at the top of the leaderboard all afternoon.

Eventually, Zinno overcame the challenge of another former bracelet winner James Chen to win his third WSOP title and the massive $182,872 top prize.

It didn’t take long to find the first champion of the day, as Vladimir Peck and Venkata Tayi played out the heads-up battle to close the delayed Event #18, the $2,500 Mixed Triple Draw Lowball event.

Tayi went into play with a lead, but Peck made a wheel straight to overtake his compatriot and sealed the deal just a few minutes later when a jack-low in 2-7 Triple Draw set up victory and gave Peck the top prize of $134,390 and a maiden WSOP bracelet.

Dejuante ‘DJ’ Alexander topped the 20th Event of the WSOP so far, with a stunning victory in the Flip & Go variant as he saw off the challenge of David Peters at the final table.

That fate also befell Peters, however, as he crashed out in fourth when his all-in with king-jack was called by Alexander, who had king-queen. It was a marginal call and turned out to be a magical moment for Alexander, who would have had less than a handful of big blinds left if he’d lost that pot.

Instead, he used it as a springboard to victory as he closed it out, winning heads-up against Jason Beck to win $180,665 and his first WSOP jewelry of a career that is now defined by a brilliant call and the inaugural bracelet event in this new poker format.

Event #17, the $1,500-entry Millionaire Maker, saw Philip Verel bag the overnight chip lead at the end of a busy Day 3 in the event. With 170 players down to just 20 by the close of play, everyone still involved can visualize that million-dollar top prize that will await the winner.

Scott Abrams went wire-to-wire on Day 2 as the overnight chip leader continued his domination of the leaderboard for a second day at the felt. As 641 entries have now been whittled down to just 24 hopefuls, there were also end-of-day bags to be filled with chips by other big names.

With stellar company in the 24 remaining players, plenty of multiple bracelet winners ended the second day with real hope of winning another bracelet tomorrow and the $170,269 top prize.

With 644 entries and a prizepool of $582,180, just 170 players made it through the Ladies No Limit Hold’em Championship, with Angelina Rich bagging the biggest stack of 301,000. She was closely followed in the counts by Lily Keletto (265,000) and Michelle Ferrante (215,100) as players made it through to the next days play, where the money bubble will burst and put 93 ladies in the money.

Plenty of big names have already busted, with Maria Ho, Melanie Weisner and poker legend Kathy Liebert all exiting, but a number of superstars of the game survived too, with Ebony Kenney (137,400), Jamie Kerstetter (133,000) and Xuan Liu (39,800) all making the cut.

Finally, the $1,500-entry Event #23, the Eight Game Mix Six-Handed tournament kicked off on Monday night as 484 total entries were reduced to just 144 playes who made it through Day 1 of the three-day event.

While players such as Yuval Bronshtein, Jason Somerville, Joe McKeehen, Joao Vieira and Shaun Deeb all busted, others such as Josh Arieh (169,300), Daniel Zack (149,400) and Andre Akkari (122,200) all bagged over the average and will harbour hopes of getting closer to glory on Day 2 tomorrow.