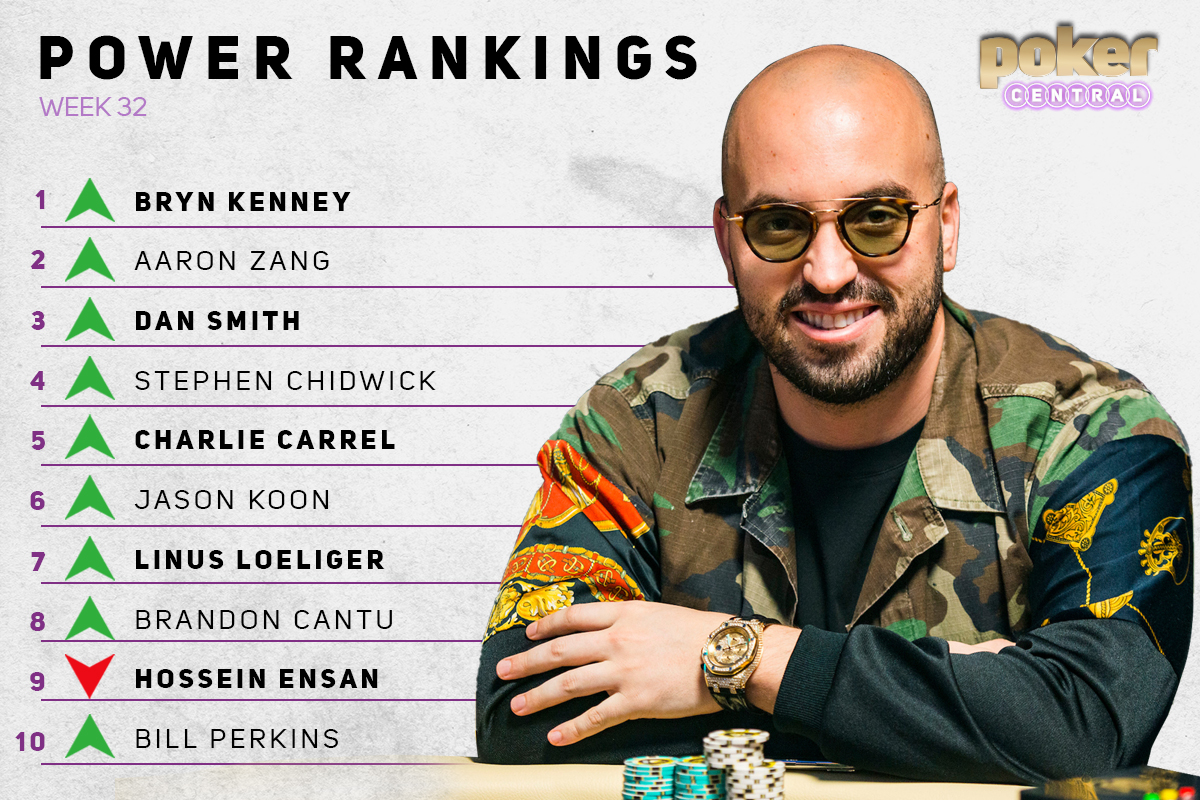 After a bit of a hiatus in light of the World Series of Poker Main Event ending and the world of poker taking a little two-week snoozer, the Poker Central Power Rankings have been brought back to life! It must come at no surprise that Bryn Kenney dominated the voting as he unanimously took the No. 1 spot over the actual Triton Millon winner, Aaron Zang, followed by Dan Smith and Stephen Chidwick. The only non-Triton names on the rankings this week are WSOP Main Event champion Hossein Ensan and Brandon Cantu who entertained the PokerGO fans with some exciting poker on Poker After Dark.

His ascend op the poker ranks has been steady since he first started battling in the high roller streets, culminating in him “winning” the Triton Million for a staggering $20 million. Kenney now leads the all-time money list with $55.5 million, more than $10 million ahead of Justin Bonomo who lead this list for the last year! Read all about Kenney’s road to No. 1 here, a recap of the final table here, and just give this Tweet I sent out on the weekend a look for some context on his journey.

While he didn’t take home the largest payout, Aaron Zang was indeed the winner of the Triton Million! Zang took home £13.7 million, or $16.7 for the purpose of the all-time money list where he finds himself in 32nd place right now. Zang has taken the No. 1 spot on China’s all-time money list, taking the top spot from Elton Tsang, winner of the Big One for One Drop in Monte Carlo a few years ago.

Climbing to fourth on poker’s all-time money list, Dan Smith finished third in the Triton Million for career-best $8.7 million score. At the final table of the Triton Million, it looked as though Smith was getting nowhere near a payout of this level but the best river card of his life changed that quickly.

Lost in all the Bryn Kenney madness is the fact that Stephen Chidwick is continuing to put together an insane year of his own. If it wasn’t for an enormous coin flip that sent him out the door at the final table of the Triton Million, Chidwick very well could’ve been leading both the all-time money list and be the winner of the Triton Million. Chidwick cashed for a career-best of $5.3 million in the Triton Million after making this insane call for his tournament life with seven players remaining.

👀 We've seen some sick calls. This might be the best one yet from Stephen Chidwick 🇬🇧 . Hero call for his #TritonMillion life!!

Charlie Carrel does grind the big schedule as he used to when he first burst onto the scene but when he does show up he always makes the most of it. Carrel recorded the largest score of his career by winning the £50k High Roller at the Triton Super High Roller Series for £1.3 million, the third seven-figure score of his career. Carrel now ranks third on the UK’s all-time money list behind only Sam Trickett and Stephen Chdiwick.

🥇 Congratulations @CharlieCarrel 🇬🇧 ! Winner of the £50k NLH 8-Handed event, collecting a cool £1,321,000 after hitting a pair of 2s on the river to beat @JasonKoon 🇺🇸

Jason Koon finished second to Carrel in the £50k High Roller to become the eighth player in poker history to record $30 million in career tournament results. Koon cashed for a cool $1.1 million, the seventh seven-figure score of his career and his fifth biggest all-time.

Playing under the handle “LLinusLLove”, Linus Loeliger has been tearing up the online cash games for many years now. This week, however, he had his big live poker breakthrough with a win and a third-place at the Triton Super High Roller Series for a total of $1.5 million. These two scores immediately propelled Loeliger to the top of the Swiss all-time money list with just six total live cashes, eclipsing Claudio Rinaldi who’s got 78 live results.

He’ll be on “Open Seat” week on Poker After Dark starting tomorrow but he brightened up the most recent “Main Event Hangover” week as well inside the PokeGO Studio. Brandon Cantu provided entertaining play and did it in a winning way while he was at it.

The Main Event champ has a whole year to shine before he passing on the honor to someone else and we ranked him one more week before he’ll likely fall out of the Top 10. Ensan won the biggest tournament of the year for $10 million which lept him into seventh on Germany’ all-time money list surrounded by a who’s who of the international high roller circuit.

Closing out the list this week is Bill Perkins! Perkins made the final table of the Triton Million where he ultimately finished in sixth place for the biggest score of his live tournament career. Perkins now has $5.4 million in career earnings which puts him one big win away from a spot in the Top 100 all-time. A fun caveat to Perkins’ deep run was a competition he ran where fans could predict his finishing position for a small piece of the action. Obviously, your truly guessed that Perkins would finish in fifth place so no bacon for me!

6th! Welp, we did out best but no fade of AA with our 5BB shove. Great ride & great show put on by @tritonpoker . Thanks to @partypoker s @robyounguk & Paul Phua (sp?) for inviting me & convincing me to play. Most of all thanks to all well wishers it really motivated me! #Thanks