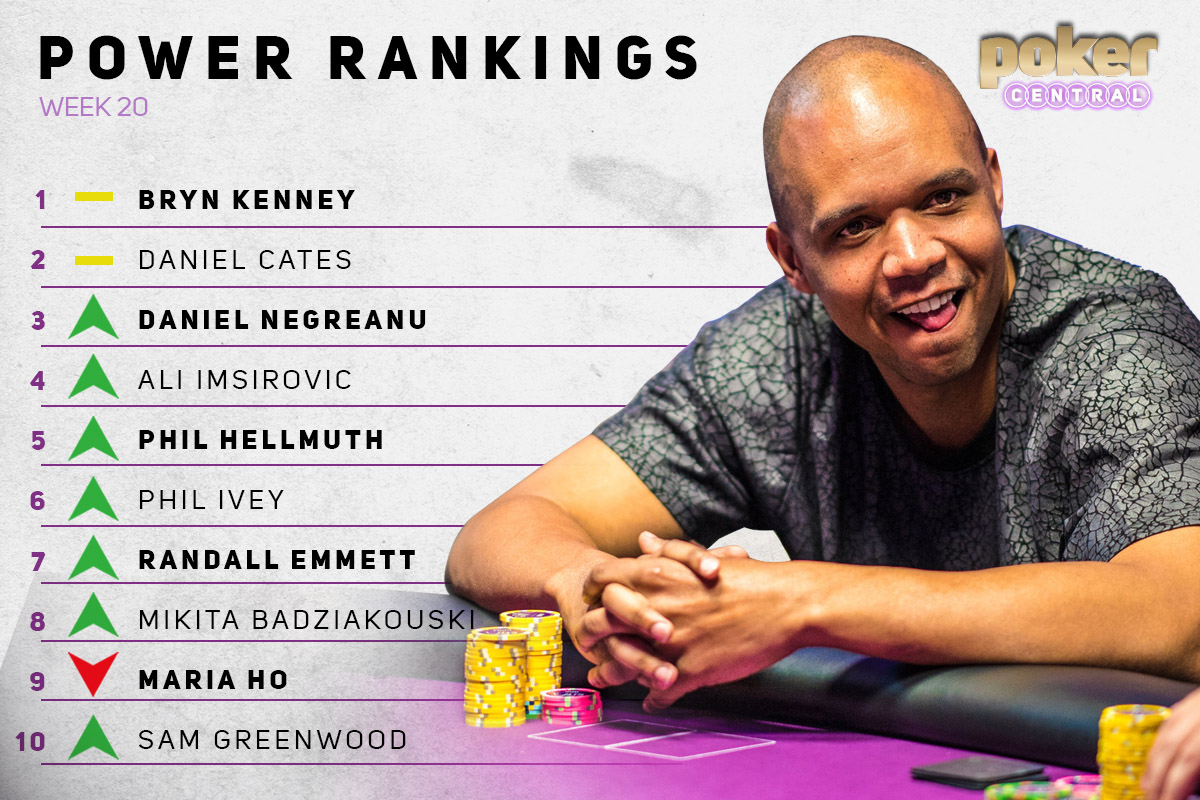 The World Series of Poker is just a few days away and this week’s Poker Central Power Rankings are heavily influenced by Poker After Dark, the Triton Super High Roller Series, and one particular gentleman getting married while the other released his Master Class! Let’s dive in!

Big results and another week at the top on the Power Rankings for Bryn Kenney! It’s tough to say whether Kenney will be putting in the work during the WSOP given that he’s already won more than $9 million in 2019 alone, but a bracelet or two in some of the biggest events would not come as a surprise!

After some beer pong with Tom Dwan, a naked video with models and plenty of other fun activities, Dan ‘Jungleman’ Cates was back to his winning tournament ways on one of the closing days of the Triton Super High Roller Series to stay in second place on the rankings.

Could Daniel Negreanu be any busier than he has been the last few weeks? Well, he probably can because the World Series of Poker is about to get underway! Either way, getting married, planning out his summer, $25k Fantasy, and this bomb he dropped on the poker world today must’ve also cost him quite a lot of energy. Rest up Kid Poker, big weeks ahead!

I have an announcement I’d like to share with you all about my time with @pokerstars pic.twitter.com/qqY3ABPOTw

Winning his first ever Poker After Dark Sit & Go, Ali Imsirovic entertained the crowd with fast and fun play as well as revealing a shirt that needled Randall Emmett. Imsirovic is ascending quickly to being one of the fan favorites among the younger fans and a big summer could only add more to that!

Turns out @aliImsirovic may have found the way to silence #RandallEmmett …or did he? Watch the hilarious encounter live on @PokerGO now! #fofty pic.twitter.com/zd2TLC6glY

Up to his usual antics, Phil Hellmuth put on a show inside the PokerGO Studio during 888 Poker Week on Poker After Dark. On the first show, Hellmuth finished second to Ali Imsirovic while on the second night he built up a stack before hitting the rail empty-handed. Hellmuth is ready for a big summer and we’re predicting plenty of deep runs!

The G.O.A.T. is back! No, he’s not playing any big events lately and nor have we seen him inside the PokerGO Studio lately, but his Master Class just got released. It’s exciting to hear the best strategies from the man himself, but it’s hard to picture what it is that he will be sharing! Ivey is not known as a strategy talker and in the GTO-era, we’re even more excited to pick up on some gems from the 10-time WSOP bracelet winner.

Known for his enigmatic table presence, our newest instructor is considered the best all-around poker player in the world. Now he’s opening up about how he thinks. Introducing @philivey’s #MasterClass on Poker Strategy: https://t.co/Fqgc02NgKr

Randall Emmett was back to his usual entertaining antics on Poker After Dark this week! Emmett came very close to taking one of the two down, racking up a bunch of chips before things ran cold. Emmett took third place falling just one place short of the money but we can say with confidence that this wasn’t his last crack at it! This marks Emmett’s fifth time in the Top 10 of the Poker Central Power Rankings this year, his highest placement being second back in Week 15.

Amazing day on @pokercentral #l #PokerAfterDark got 3rd place against the best of the best!! Was magical even though @all_in_ali_poker gave me my second bad beat!! @philhellmuthpositivity @jennifertilly @bhanks11 I dedicated this episode to my friend #mickeycraft! May god rest your soul! @boomer__soonerbaby

No matter how you spell his name, sometimes you just gotta put some respect on it! Currently ranked 15th on the all-time money list with a staggering $24.4 million in earnings, Badziakouski added to that total in impressive fashion in Montenegro by cashing for $2.8 million across three cashes. The Belarusian is now up to six seven-figure scores in just two and a half years.

Maria Ho just down to ninth on the Power Rankings, her lowest rank in nearly two months! Ho is getting ready for the World Poker Tour final table at the HyperX Esports Arena next week that could turn into the biggest score of her career! Go Maria Go!

Just like how we gotta put some respect on Badizakouski’s name, the same can be said for Sam Greenwood! Greenwood is up to second on Canada’s all-time money list with $18.5 million in career earnings after three cashes worth nearly $2 million. Greenwood is up to $5.7 million for the year, eclipsing last year’s total when he set a career best.