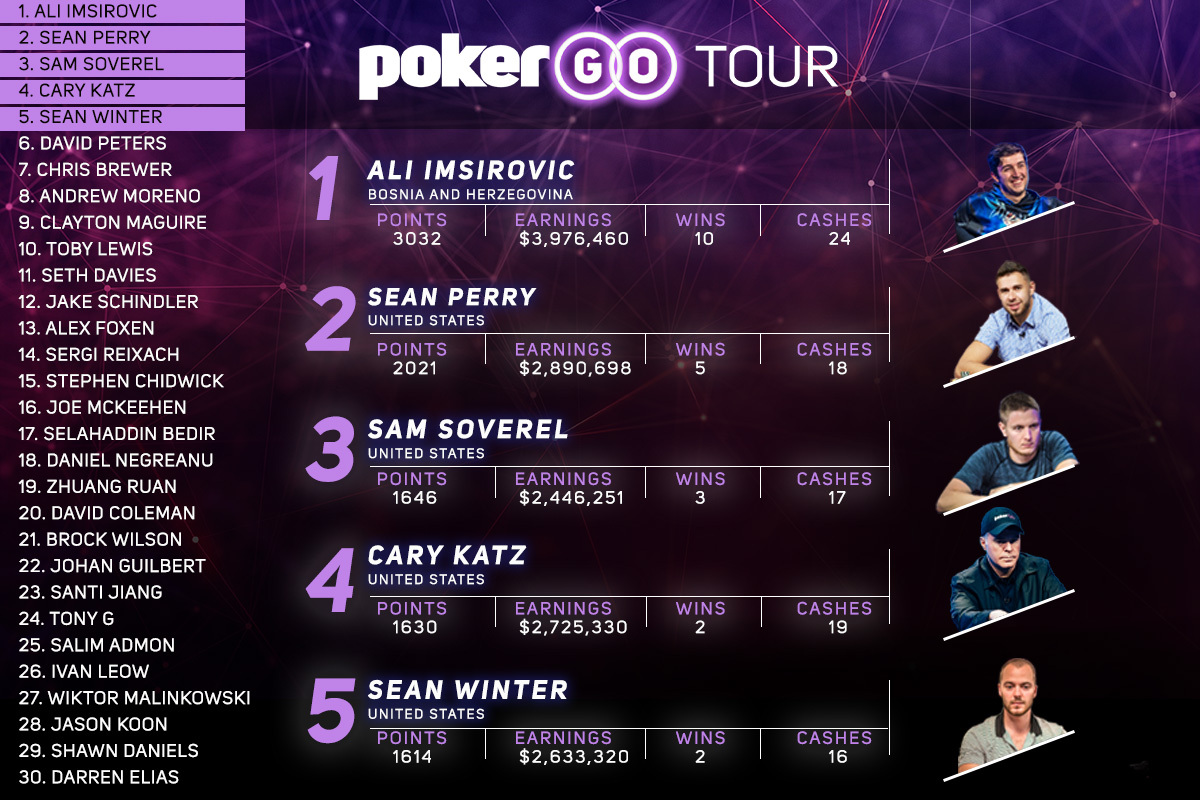 Following the conclusion of the Super High Roller Series Europe and Super High Roller Bowl Europe at Merit Royal Hotel Casino & Spa in North Cyprus, the entire PokerGO Tour presented by Guaranteed Rate leaderboard has seen movement across the board due to the ten qualifying events that played out. Selahaddin Bedir cashed three times for over $1.5 million and won one event to climb into 17th place, while Johan Guilbert won Event #2 and moved into 22nd place on the back of eight qualifying cashes from this season. Santi Jiang cashed in every Short Deck event and sits in 23rd place, while Tony G won two Short Deck events and jumped into 24th place. The final two players from Super High Roller Bowl Europe sit in 26th and 27th place respectively with Ivan Leow amassing 601 points from his two cashes, while the newest Super High Roller Bowl champion Wiktor Malinowski collected 600 points for his career-best $3,690,000 score.

Poker Masters Purple Jacket winner Ali Imsirovic continues to hold the top spot and collected one win and two cashes to become the first player to eclipse the 3,000-point mark and sit more than 1,000 points ahead of his nearest rival Sean Perry who didn’t make the trip to Europe along with Sam Soverel and Sean Winter who sit in third and fifth place, respectively. Cary Katz moved ahead of Winter into fourth place with a cash in the final event.

The two big movers into the top ten were David Peters and Chris Brewer. Peters collected two cashes – including a fifth-place finish in Super High Roller Bowl Europe for $820,000 – and moved into sixth place, while Brewer collected three cashes and now sits in seventh place with 1,365 points. Seth Davies collected 803 points in Europe to climb into 11th place on the PokerGO Tour presented by Guaranteed Rate leaderboard, while Jake Schindler‘s 374 points saw him climb to 12th place overall.

The next set of tournaments that are part of the PokerGO Tour presented by Guaranteed Rate schedule is the 2021 Poker Masters running from September 7-19, 2021, with 12 events on the schedule and buy-ins ranging from $10,000 to $100,000. Following that will be the $300,000 buy-in Super High Roller Bowl that runs from September 27-29, 2021. Both events will be held inside the PokerGO Studio at ARIA Resort & Casino with the PokerGO News Live Reporting Team providing on-site live updates throughout the entirety of each event.