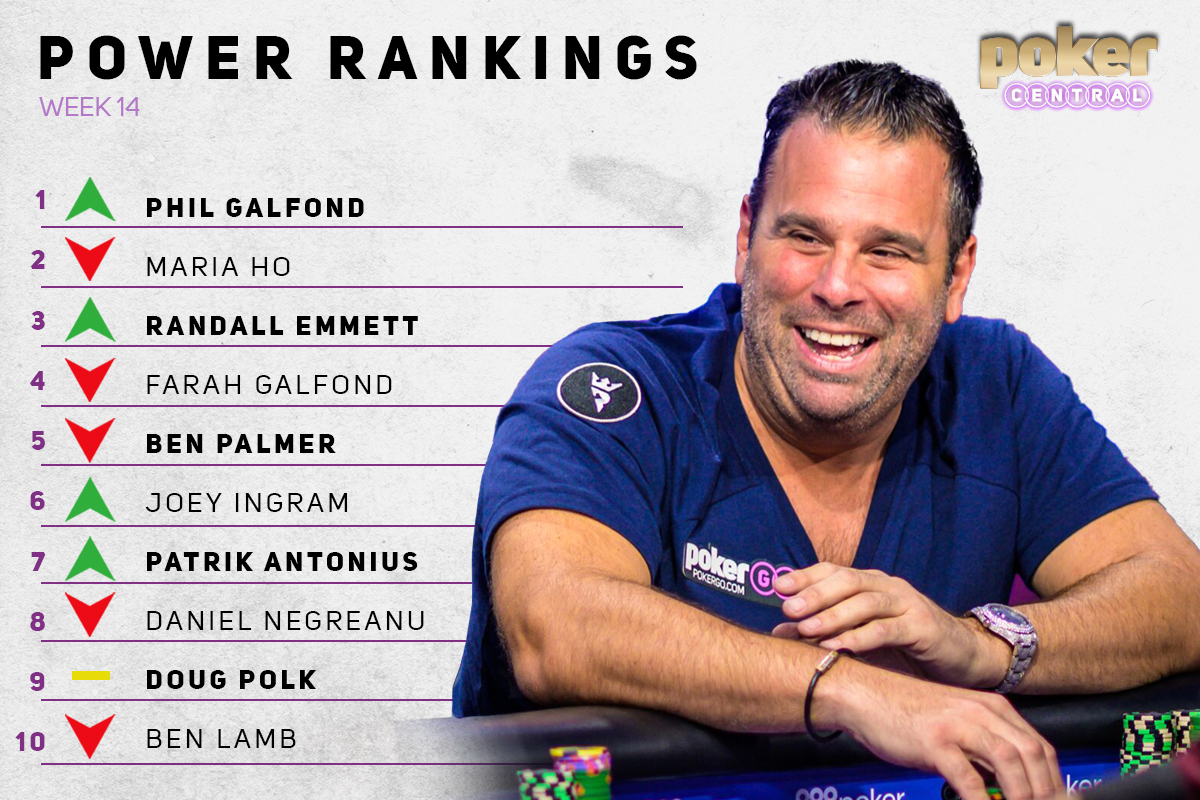 Randall Emmett jumps high onto the Poker Central Power Rankings after his Poker After Dark appearance.

There it is! The Power Rankings are in and it’s Phil Galfond who jumped to the top of the list after jumping on the Poker Central Podcast as well as hosting “Run it Once” week on Poker After Dark. As a result of the highly entertaining two nights of action, Randall Emmett went from unranked to third while Joey Ingram makes his debut in the Top 10 as well.

He doesn’t need an introduction and no arguments need to be made against him. Phil Galfond is a deserving No.1 after a very strong week that’s continuing his stellar 2019. A newborn, a brand new poker website, playing and commentating on Poker After Dark, Phil Galfond does it all and does it all very well.

A constant in the Top 10 of the Poker Central Power Rankings, Maria Ho once again shows that she’s unstoppable and arguably the game’s premier ambassador in 2019. Collecting a Global Poker Award for “Broadcaster of the Year,” Ho continues to impress and add to her brand as a top player, presenter, and ambassador.

I didn’t expect that winning Broadcaster of the Year would mean so much to me. Thank you all for continually tuning in and for supporting me and the game of #poker we all love! This one’s for you!#GlobalPokerAwards pic.twitter.com/6BhC5rXsuf

Brent Hanks dubbed him, “The Mike Matusow of 2019,” in the most complimentary way possible and it’s easy to see why. Emmett brings an unfiltered stream of high energy positivity to the tables, entertaining both players and fans along the way. On “Run it Once” week, Emmett found himself outside of his No Limit Hold’em comfort zone but that didn’t seem to bother him one bit. This is Emmett’s first appearance in the Top 10

Randall Emmett with a totally normal reaction to beating @PhilGalfond in a hand of PLO. 😳🔊🆙https://t.co/5rUlItuiNK pic.twitter.com/Eueo9eHFHl

Farah has become a fan favorite among the Poker Central voting panel, maintaining her spot in the Top 10 this week by dropping just one spot down to fourth. Farah jumped into the commentary booth while her husband Phil was raining poker misery down on his opponents inside the PokerGO Studio and we thoroughly enjoyed her presence.

I’m about to jump in the booth. My first ever guest commentary. I think I’m going to be awesome. https://t.co/hQq36lu4PT

He has to be followed to be understood but Ben Palmer is one of those in the poker world who won’t let an opportunity slide by to speak his mind. Palmer is on his way out of the Top 10 but still sits at No. 5 after a strong Poker Central Podcast appearance along with his WPT Venetian win just two weeks ago.

Joey Ingram is the undisputed social media king of poker, blending together both play, entertainment, gossip, and a good dose of out-of-line activities. Appearing on Poker After Dark for the very first time during “Run it Once” week, Ingram did well mixing it up with the likes of Phil Galfond and Randall Emmet!

Finished up the Poker After Dark session up about $8000 after a couple really huge hands to end the session. We were in for $20k and made the big rebound 🔥🚀🔥

YouTube video up tomorrow from today's session. Thanks for all the messages & support ♥️♥️♥️ pic.twitter.com/cgE2nq1w4w

Patrik Antonius wrapped up his first ever tournament series in Tallinn, Estonia, and we are here to celebrate that with him. Give Antonius a follow on Instagram as he’s working hard to do positive things in poker. Rumor has it Antonius will play the WSOP Main Event this summer along with some high stakes cash games and we are ready to get him back on the podcast when he shows up!

It’s been an action packed week in tournaments and cash games. Our event had lots new entertaining moments and everyone seemed to have a blast. The PAPC has been a huge success with Estonian records broken for both cash games and tournaments. We tried a new shot clock format for the High Rollers which turned out to be a great success! Follow our PAPC instagram @patrik_antonius_poker and facebook and you keep up where we are going to have our tournament next! During the PAPC we also introduced The Beta Version of our application called First Land Of Poker (FLOP). It’s a exlusive social media application for poker players where you can find likeminded friends, engage and share your passion for poker, get real time information on poker rooms, find cash games in your favorite poker room, create your own game, invite your friends and meet at casino! You can now download the Beta Version in App Store and Play Store! #papc #patrikantoniuspokerchallenge #flop #firstlandofpoker #poker #pokerlife #pokerlifestyle #pokerplayer #highstakes #cashgame #pokerfestival #pokertournament #olympiccasino #tallinn #mobileapplication #newapp #application

A post shared by Patrik Antonius Official (@patrik_antonius_official) on Apr 7, 2019 at 6:07am PDT

No play for Daniel Negreanu again this week but that doesn’t matter for the king of Twitter. Negreanu touched on a plethora of topics, as always, most notably how exciting this weekend in sports was and how perhaps only his very own wedding would compete with it!

Tiger in contention at Masters

Raptors and Clippers in playoffs

VGK at home for game 3

Then top it all off with GAME OF THRONES!

Maybe the best weekend of the year.

Doug Polk also remains in the Top 10 through chiming in on every possible topic on Twitter ranging from the NBA Playoffs to ethics and from taxes to Game of Thrones. It will be nice to see Polk back at the tables again at some point but who knows whether he’ll ever get motivated again to duke it out at the felt after having expanded his focus into many other areas.

The train has nearly reached its final stop as it pertains to the Ben Lamb gambling extravaganza. The story is still just as epic but until we hear more juicy details, Lamb might’ve seen his last week in the Top 10. But because it’s so good, here’s one more look at the Twitter thread that’s worthy of being turned into a book or perhaps a TV show.

Having one of the cooler experiences of my life. Let me explain…@partypokerlive put on a amazing event in Rio de Janeiro, Brazil. Beautiful city and the venue, Copacabana Palace was amazing. Like out of a movie. In the 25k high roller tournament @EnjoyPde added 500k…

Lots of big names fell just barely outside of the Top 10, most notably Ali Imsirovic and Seth Davies. Davies and Imsirovic both won events that counted towards High Roller Player of the Year while the former also took home the Breakout Player of the Year award at the Global Poker Awards. Other names that just fell short were David Eldridge, Jared Jaffee, Matt Berkey, Loni Harwood, Brad Owen, and Phil Hellmuth.