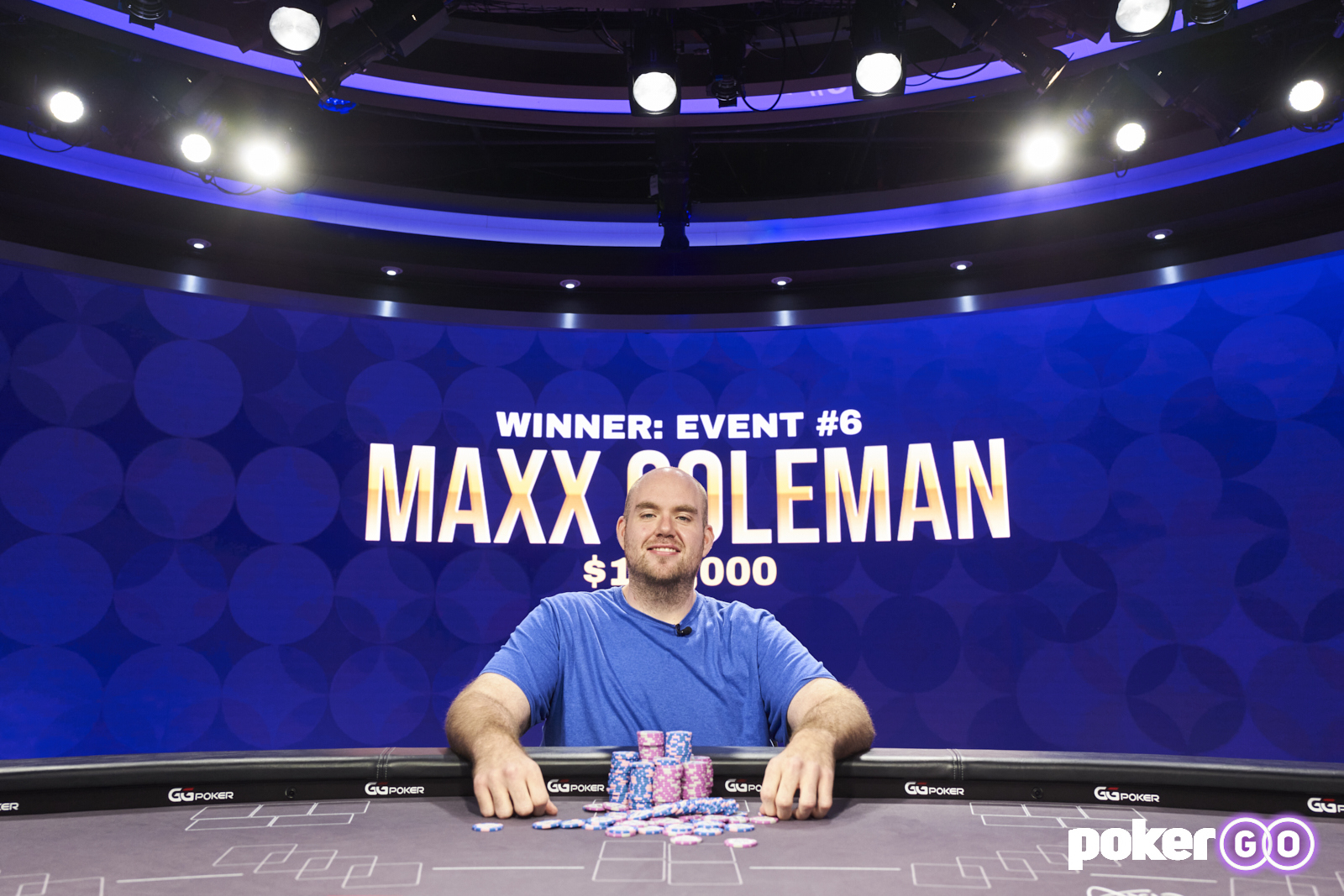 After entering Day 2 of Event #6: $10,000 8-Game at the 2021 Poker Masters with the chip lead, Maxx Coleman won the event for $120,000. Coleman topped a field of 30 entries and finally grabbed a title inside the PokerGO Studio after previously having some close calls. Coleman topped Chad Eveslage in heads-up play to get the victory.

“It feels good,” Coleman said. “This is I think my fourth final table in five events [here at the PokerGO Studio], so to finally get the win feels pretty good.”

“I find [mixed games] a lot more fun,” Coleman said. “All of these people are too good at no-limit hold’em… I used to play mostly just pot-limit Omaha, but it can get boring playing the same game over and over and over again, so being able to switch games is a lot more fun. There are more opportunities.”

Joining Coleman and Eveslage in the final five were Stephen Chidwick, Erik Sagstrom, and Jeremy Ausmus. Ausmus was the first player to bust, making his second cash of the series after coming in second place in Event #2. Ausmus picked up $21,000.

After Ausmus’ elimination, Sagstrom went out in fourth place. The Swedish high-stakes legend was eliminated by Chidwick and earned $33,000 for the run.

Despite busting Sagstrom in fourth place, Chidwick was the next player out the door. He was all in during a round of no-limit hold’em against Coleman. Chidwick had the

and Coleman had him dominated with the

. Coleman flopped top two pair and held from there. Chidwick picked up $48,000 in prize money.

Coleman began heads-up play against Eveslage with the chip lead. Coleman had 3.3335 million to Eveslage’s 1.165 million. The two battled for a bit and Eveslage even worked his way into the chip lead, but ultimately it was Coleman to emerge as the victor.

On the final hand, Coleman made a nine-eight-three low in razz to beat Eveslage’s nine-eight-five. Eveslage picked up $78,000 for the finish.

Through six events, Daniel Negreanu remains the leader at the top of the 2021 Poker Masters leaderboard. He has 281 points following his victory in Event #5. Ausmus did improve his standing from 10th place to seventh place with his fifth-place finish in this event. Eveslage moved up to 10th place on the standings.

Nothing changed within the top 10 of the PokerGO Tour presented by Guaranteed Rate leaderboard. It remains Ali Imsirovic in a commanding position at the top.