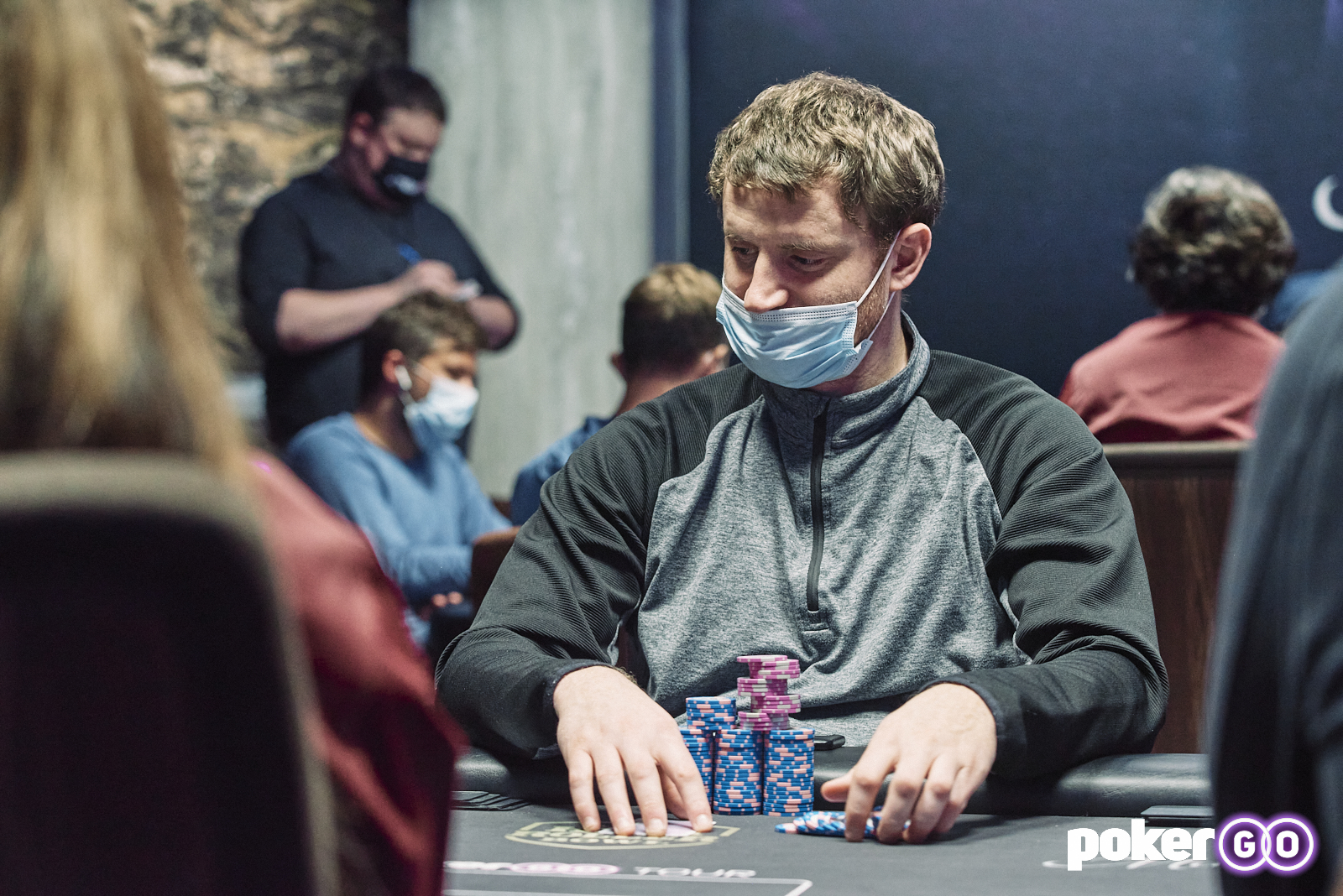 Joining Peters and Wilson at the final table are Shannon Shorr, Jonathan Jaffe, Dylan DeStefano, John Riordan, and Ben Yu. Yu heads into the final as the short stack with just 325,000 while the remaining six players are all over one million in chips, with Peters leading the way at 2.250 million.

Getting to the final table was the easy part. Getting into the money was another story. Following Chance Kornuth’s elimination in 14th place to begin hand f:or hand play, the field refused to go away as the remaining 13 players went hand-for-hand for nearly an hour and a half.

Chad Eveslage went into hand-for-hand play as the short stack with just 65,000 in chips and the blinds at 10,000/20,000 with a 20,000 big blind ante but quickly doubled with king-jack against the six-deuce of Wilson. Mitchell Halverson found a double shortly thereafter at the other table, and then the madness began in earnest.

Wilson opened to 40,000 from early position, and Eveslage called from the big blind. The flop fell

for a pair of aces, but Wilson held

for a flopped set of aces, leaving Eveslage looking for runner-runner to stay alive. Runner-runner he would find as the turn

completed the wheel to chop the pot and keep Eveslage alive.

Meanwhile, on the other table, Peters and Jaffe found themselves in a raising war pre-flop, and when the dust settled, Peters was all-in for 880,000 total, and Jaffe had called. Peters held ace-king against the pocket jacks of Jaffe. Peters found a king on the flop to double, move into the chip lead and never look back.

In the end, it would be Wilson getting his revenge on Eveslage to burst the money bubble. DeStefano limped from late position, and Wilson raised to 120,000 next to act. Eveslage was all-in for his last 40,000 from the big blind, and DeStefano folded. Wilson held ace-ten against the ace-five of Eveslage, the board ran out

on the flop, and the turn

gave Eveslage an open-ended straight draw but he couldn’t find the straight on the river and was eliminated in 13th place.

Following Eveslage’s elimination, players began to fall like flies as Event #1 went from 12 players down to seven within a half-hour of play. Halverson and Elias were the first two players to hit the payout cage when they were eliminated in the same hand by Jaffe. Elias moved all-in on the button for his last 65,000 in chips, Jaffe moved all-in in the big blind, and Halverson called all-in from the big blind for his last 80,000 in chips. Jaffe held nine-eight suited against the king-six of Halverson and the king-ten of Elias. The board ran out nine-high, and Jaffe flopped a pair for the double knockout. Elias finished in 12th place for $16,400, and Halverson finished in 11th place for $24,600.

Jim Collopy would be the next to fall when he shoved the last of his chips into the middle, holding king-six against the ace-nine of Jaffe. Jaffe flopped an ace, and Collopy was out the door in 10th place for $24,600 and sent us to the unofficial final table.

On the first hand of the unofficial final table, Nitis Udornpim moved all-in from early for his last 185,000 and was called be DeStefano in the big blind. Udornpim held ace-jack against the king-seven of DeStefano. The board ran out king-high, and DeStefano flopped a pair of kings to eliminate Udornpim in ninth place for $32,800.

Sean Perry would be the next to fall when he ran his pocket eights in the pocket queens of Shannon Shorr to finish in eighth place for $32,800. With the cash, Perry further cements himself into second place in the PokerGO Tour presented by Guaranteed Rate leaderboard with 2,054 points, still well behind the 3032 points of first place Ali Imsirovic. Peters is the only player at the final table in the top ten of the leaderboard and currently sits in sixth place, which is where Peters will stay even with a win in Event #1 as he currently sits 216 points behind fifth-place Sean Winter.

When play resumes there is 10:19 remaining in level 15 and the button is in seat 3

The final seven players will return to the PokerGO Studio on Wednesday, September 8, at 12:30 p.m. PT with the final table airing on PokerGO.com at 1:30 p.m. PT.